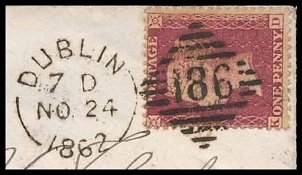 Postage stamps of Ireland did not exist until 1922.  When the first postage stamps appeared in 1840, British stamps were used within Ireland, as shown above.

Ireland was conquered by the Tudor Monarchs of England during the 16th Century, and England began colonizing the island with English settlers.  King Henry VIII of England was proclaimed the King of Ireland in 1542, and from that time forward, Ireland would be part of what would eventually become the United Kingdom of Great Britain and Ireland.

Ever since the 5th Century, when Christianity first came to Ireland, the Irish people have been Roman Catholics.  The problem started during the reign of King Henry VIII, when Protestantism became the official religion of the kingdom.   With Protestant rule,  the Catholic majority and Protestant dissenters in Ireland were placed at a social and political disadvantage.  Eventually, this situation created resentment that lasted for centuries, and eventually, that resentment lead to open rebellion.

The Irish War of Independence, from 1919 to 1921, resulted in the Anglo-Irish Treaty of December 1921.  The treaty provided for the partition of Ireland and the creation of an autonomous Irish Free State, within one year, which would politically be a dominion within the British Commonwealth of Nations.

If one were to bypass all of the provisional overprints of 1922, building an impressive collection of the stamps of Ireland is a good possibility.

I have known people that have done this.  I ran into an Ireland collector at a local stamp club meeting once.  They had Ireland complete, except for the 1922 issues.  When I inquired about that, the collector told me that they would NEVER put any kind of BRITISH stamp in their collection!

The stamps that were overprinted for the provisional government and the Irish Free State during 1922 present a challenge.  Being that they are overprinted on the definitive postage stamps of King George V, many of them are quite expensive, and that's not including varieties, such as inverted overprints, missing letters, and double overprints.  There are seventy-four major stamp issues listed in the Scott catalog.  A collection of these issues of 1922, along with errors, varieties, and postal history, could be a philatelic specialty in itself. 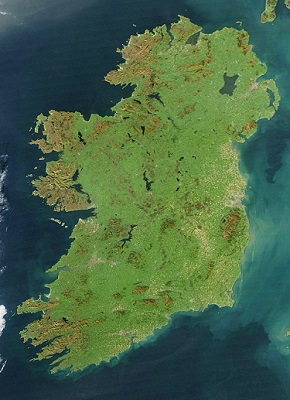 Links to historical articles and reviews of many of the postage stamps of Ireland will eventually appear at the top of the third column of this page.

Return to Home Page from
Stamps of Ireland