The word "Island" (English: Iceland), inscribed on the postage stamps, means exactly what the English name implies.  Being that the island was originally settled by the Norwegians during the 9th Century, the name is a combination of the Old Norse words "Is" (English: Ice) + "Land" (English: Land). 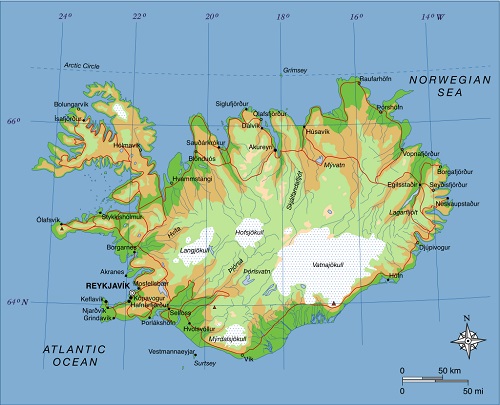 What the island nation's name implies is NOT absolutely true.  Very little of Iceland is actually covered with ice.  The coastal areas, which are ice-free year round, have mild Summer temperatures.  Even the Winter temperatures in the coastal areas, due to the North Atlantic Current, hardly ever fall below freezing.  The island is also home to many volcanoes and geysers, making it, at least geologically, pretty hot. 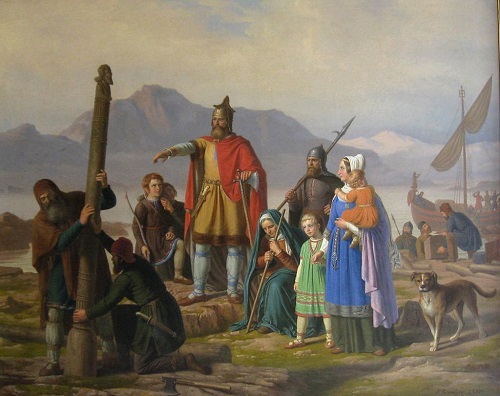 During the 8th and 9th Centuries, Celtic monks had lived on the island, but they left soon after the Norwegians and other Scandinavians began arriving, as they didn't want to associate with pagans.  By the end of the 10th Century though, most of the Scandinavian Icelanders had adopted Christianity.

In 874, the Norwegian chieftain, Ingólfr Arnarson, established a settlement in Iceland, near the site of present-day Reykjavík, becoming one of the first permanent Scandinavian residents of the island.  He is revered in Iceland today as the "first Icelander".  By 930, most of the arable land in Iceland had been settled, and the eventual lack of additional arable land led to Icelandic colonization of Greenland and North America.  A commonwealth form of government was established, and it survived until the late 13th Century.

Between the 14th and 18th Centuries, the control of Iceland passed between the Kingdoms of Norway, Denmark, and Sweden.  In 1814, by the terms of the Treaty of Kiel, Iceland became a Danish colony.  The Danish granted a new constitution and limited self-government to Iceland in 1874.

In 1918, Denmark and Iceland established a union, becoming joint kingdoms, with the King of Denmark being the head-of-state for Iceland's foreign affairs.  At the end of 1943, the joint union with Denmark expired, and Iceland began its movement towards independence.  In the referendum held during May 1944, 97% of the population voted to establish a republic, and on June 17, 1944, Iceland became a sovereign parliamentary constitutional republic.

Pictorial Stamps of Iceland issued in December 1948
The Eruption of Mt. Helka, lasting from March 1947 to April 1948 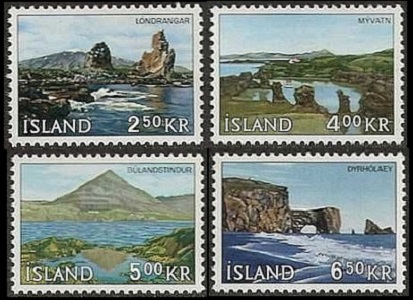 The Icelandic commemorative and pictorial stamps are favorites with many stamp collectors around the World.  Iceland is best known for three things, volcanoes, geysers, and some of the most beautiful scenery in the World.  All of these subjects have frequently graced Icelandic stamps over the last century.

Links to historical articles and reviews of the postage stamps of Iceland will eventually appear at the top of the third column of this page.


Return to Home Page from
Stamps of Iceland