During 1919, new definitive stamps of Hungary continued through the relentless process of political change.  As the year progressed, Hungary transitioned through a democratic republic, a soviet socialist republic, and then, the unthinkable, the restoration of the monarchy.  This was a very violent period for the nation of Hungary.  The needless death and suffering, for the sake of political change, must have been devastating for the Hungarian people.

The new Hungarian Democratic Republic only lasted from November 1918
to March 1919.  The president, Mihaly Karolyi, failed to establish the new government's authority and was unable to control the country.

The Hungarian Communist Party, led by Bela Kun, was organized in Moscow in November 1918.  They returned to Hungary in late November and began to recruit new members.  The Communists formed a parliamentary alliance with the Social Democrats, and by doing this, they established a majority in the Hungarian parliament.  On March 21, 1919, the Hungarian Soviet Republic or the Hungarian Republic of Councils was established.

The emergence of a new Communist state in Europe was intolerable to Hungary's neighbors.  Romania, Yugoslavia, and Czechoslovakia immediately declared war on the new Communist regime.  On August 6, 1919, the Romanian Army seized Budapest, and the Hungarian Communist government collapsed, with its leaders fleeing to Austria.  The Hungarian Soviet Republic lasted less than six months! 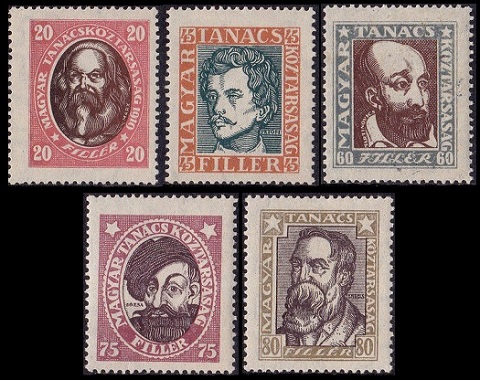 The five portrait definitive stamps of Hungary shown above were issued on June 14, 1919, with the designs featuring noteworthy socialists.  These stamps were printed with both horizontal and vertical watermarks.  The vertically watermarked stamps were never issued to post offices.

These stamps are inscribed MAGYAR TANÁCSKÖZTÁRSASÁG or HUNGARIAN SOVIET REPUBLIC.

The description details are as follows: 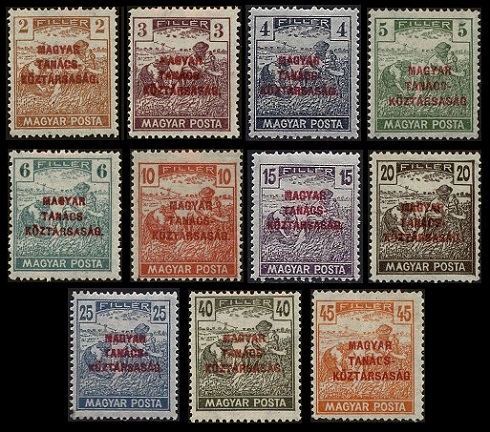 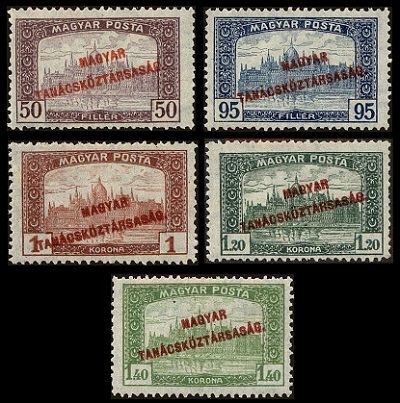 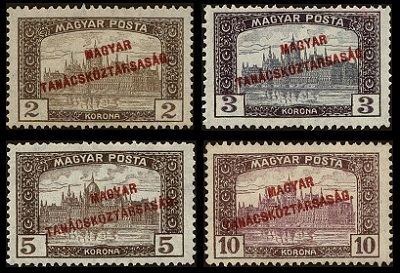 The twenty Harvesting and Parliament Building type definitive stamps of Hungary shown above were overprinted for the Hungarian Soviet Republic on July 21, 1919.

These stamps are overprinted MAGYAR / TANÁCS / KÖZTÁRSASÁG or HUNGARIAN REPUBLIC OF COUNCILS in red.  The other design attributes are the same as the Harvesting and Parliament Building definitive stamps of the Hungarian Democratic Republic. 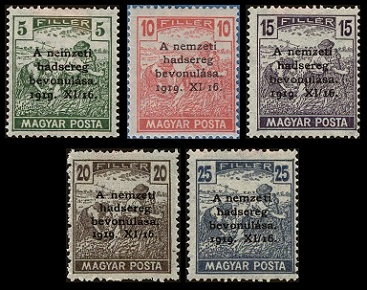 The five Harvesting and Parliament Building type definitive stamps of Hungary shown above were overprinted on November 16, 1919 to publicize the Romanian evacuation of Hungary.

These stamps of Hungary are overprinted "A nemzeti / hadsereg / bevonulasa / 1919 XI 16" or "The entry of the national army 1919 November 16" in black.  The other design attributes are the same as the Harvesting and Parliament Building definitive stamps of the Hungarian Democratic Republic.

The Kingdom of Hungary was restored in early 1920.  However, there were no available monarchs!  In the aftermath of World War I, the return to power of the Hapsburg Dynasty was completely unacceptable to Hungary's European neighbors, and the Hungarians knew what would happen, if they tried to do that.

On March 1, 1920, Admiral Nicholas Horthy was declared the Regent of the Kingdom of Hungary, and he would continue to fulfill the role as the Hungarian head-of-state until October 15, 1944.


Return to Stamps of Hungary from
Definitives of 1919