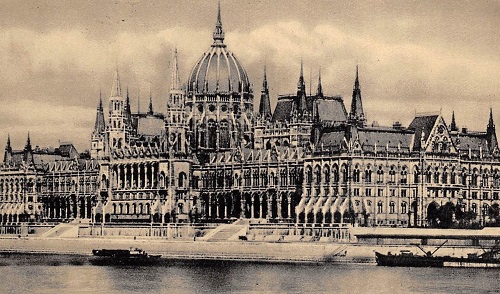 Parliament Buildings in Budapest
From an early 20th Century postcard

For the definitive stamps of Hungary, the period between 1918 and 1920 was a time of great change.  After the end of World War I and the dissolution of the Austro-Hungarian Empire, Hungary withdrew from its personal-union with Austria and declared itself a republic on November 16, 1918.  There were actually two versions of the republic.  The Hungarian Democratic Republic, as it was first called, was replaced by the Communist Hungarian Soviet Republic during March 1919.  In January 1920, the Hungarian parliamentary monarchy was restored, though the country's head-of-state would actually be a "regent" (the commander of the army) until 1944.

Of course, all these changes required changing the name of the country at the federal level.  When the new republic was declared, there was a great need for postage stamps, and this required overprinting the contemporary postage stamps of Hungary with the word "REPUBLIC" in Hungarian.  When new stamps were finally issued, the inscription "MAGYAR KIR POSTA" or "HUNGARY ROYAL POSTAGE" was replaced by "MAGYAR POSTA" or "HUNGARY POSTAGE". 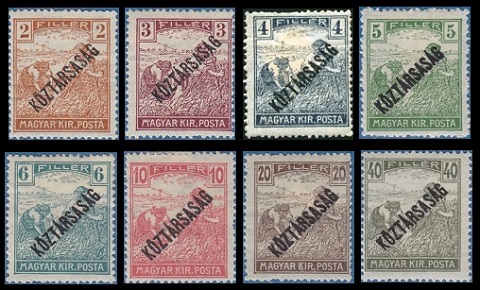 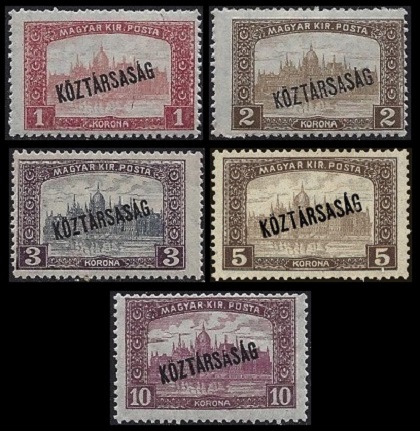 The thirteen Harvesting and Parliament Building definitive stamps of Hungary shown above were overprinted KÖZTÁRSASÁG (REPUBLIC) in late 1918. 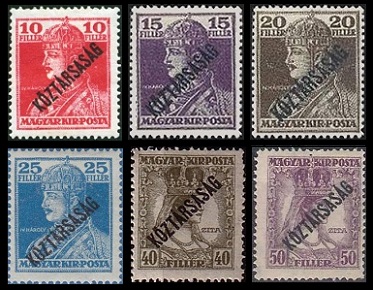 The six portrait definitive stamps of Hungary shown above were overprinted KÖZTÁRSASÁG (REPUBLIC) in late 1918. 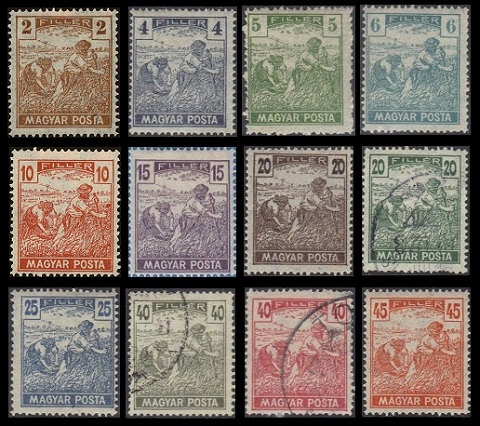 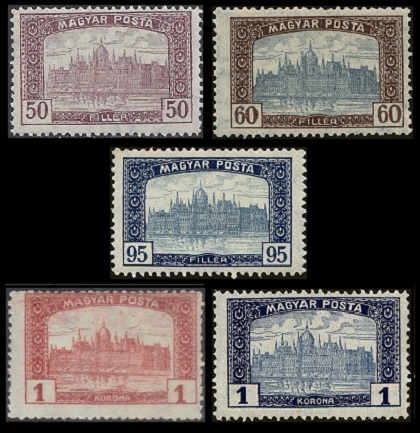 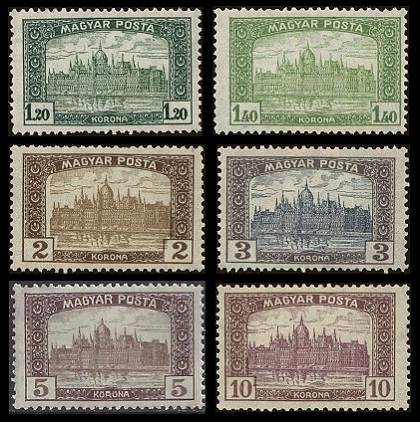 The twenty-three new Harvesting and Parliament Building type definitive stamps of Hungary shown above were issued during 1919 and 1920.

These new stamps are inscribed "MAGYAR POSTA" or "HUNGARY POSTAGE".  Their other design attributes are the same as the last issues of the kingdom.

A 3 F. denomination of this type was prepared, but it was not regularly issued.  The stamps were later sold by the government in a public auction.  They are valued at about $3.00 each, according to the 1916 Edition of the Scott Standard Postage Stamp Catalogue.

Imperforate examples exist of most of the stamps shown on this page.  They are not terribly expensive.