The postage stamps of Hungary first appeared in 1871, however Hungarian philately dates all the way back to 1850, when Hungary was part of the Austrian (Hapsburg) Empire. 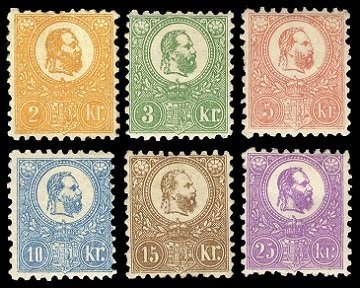 During 1867, the Austrian Empire transitioned into the Austro-Hungarian Empire.  This new empire was the result of the Compromise of 1867, under which the Austrian House of Hapsburg agreed to share power with the autonomous Hungarian government, dividing the territory of the former Austrian Empire between them.

The Hapsburg monarch reigned simultaneously as the Emperor of Austria and as the King of Hungary.  The new Kingdom of Hungary had its own parliament and governed itself internally, but the head-of-state was the Austrian Emperor.  Thus, the first stamps of Hungary, shown above, have the portrait of Austrian Emperor Franz Josef I.

With all their printing, perforating, and watermark varieties, the early stamps of Hungary present unlimited possibilities for a philatelic study.  Add essays, proofs, postal history, and postmarks, and this could become a lifetime specialty.

Since the first Hungarian postage stamp of 1871, more than 5,000 different postage stamps have been issued, with the majority of them being reasonably affordable.  Collecting Hungarian stamps can offer many years of enjoyment and can result in a very impressive looking collection.  The subject matter of the commemorative stamps also offers many different thematic collecting possibilities.

Illustrating and describing ALL the stamps of modern Hungary is far beyond the scope and capability of this website.  Fortunately for everyone, someone has already done that.  Here is a link to an excellent website illustrating almost all the Hungarian stamps.

Reviews of many of the classical postage stamp issues of Hungary, as well as the occasional historical article, will eventually appear in the page link section at the upper right.


Return to Home Page from
Stamps of Hungary