The charity stamps of Finland continued through the period from 1935 to 1940.  These are regular definitive and commemorative postage stamps, but they have a "value added tax" or "surtax" on them, designed to raise money for national organizations, public events, and public charities.

The surtax on most of Finland's charity stamps is for the benefit of the Red Cross Society of Finland.  If the surtax is for other charities, it will be mentioned in the descriptions. 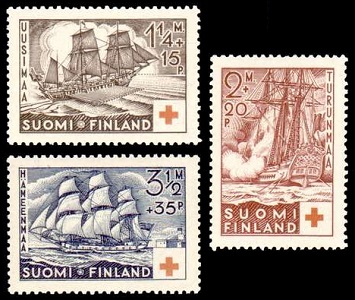 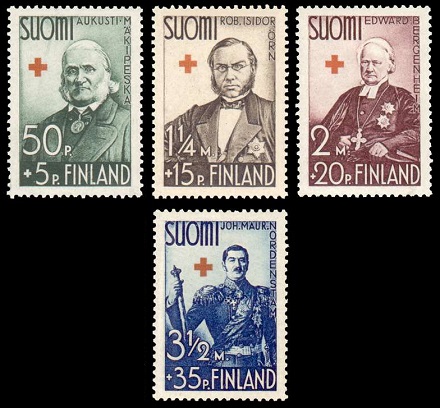 The three surtaxed charity stamps of Finland shown above (Sc. #B31-B33) were issued on January 18, 1938 to publicize the Ski Championships held at Lahti. 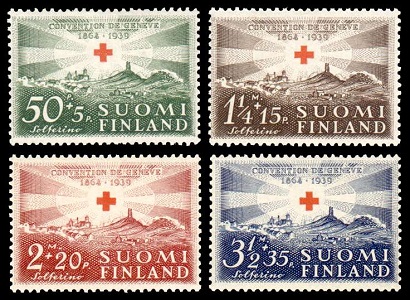 The four surtaxed charity stamps of Finland shown above (Sc. #B35-B38) were issued on January 2, 1939 to commemorate the 75th Anniversary of the Geneva Convention of 1864 and to honor the International Red Cross.

The common design features a red cross and the Battlefield of Solferino, along with the inscription "CONVENTION DE GENEVE / 1864 / 1939".

The Geneva Conventions were a series of international treaties, beginning in 1864, setting the guidelines for the humane treatment of non-combatants during times of war.  This includes wounded or sick soldiers on the battlefield, prisoners of war, and civilian casualties of war.

Henri Dunant, a Swiss businessman, visited the Battlefield of Solferino, shortly after the battle had ended, during a visit to Italy in 1859.  The horrors he witnessed and the lack of facilities and medical aid for the wounded soldiers prompted him to write a book called "A Memory of Solerfino" in 1862.  He later proposed the creation of a permanent relief agency for humanitarian aid in times of war, and it resulted in the creation of the International Committee of the Red Cross in 1863. 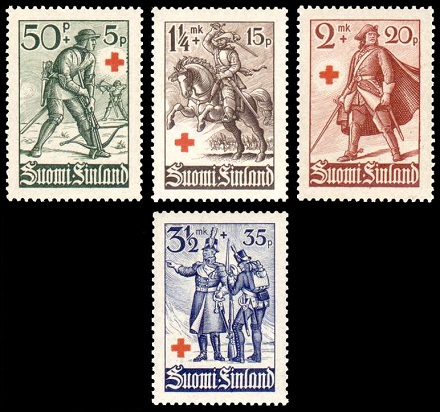 The wartime-themed designs feature a red cross and the following.

Return to Stamps of Finland from
Charity Stamps of 1935-1940 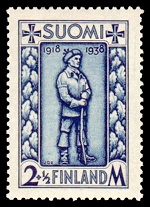 The 2 M. + 50 P. denomination surtaxed charity stamp shown above (Sc. #B34) was issued on May 16, 1938 to celebrate the 20th Anniversary of the Victory of the White Army over the Red Guards.

The surtax benefited the members of the Union of the Finnish Front. 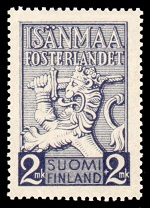 The stamp is inscribed "ISÄNMAA / FOSTERLANDET" meaning "FATHERLAND" in Finnish and Swedish.

The surtax was given to a fund for the Preservation of Neutrality.