The commemorative stamps of Finland, issued during the period from 1935 to 1941, showcased the "Kalevala", as well as significant events in Finnish history.  A special series of stamps, issued during late 1941, also publicized the "Fight for Freedom" against relentless territorial invasions by the Soviet Union. 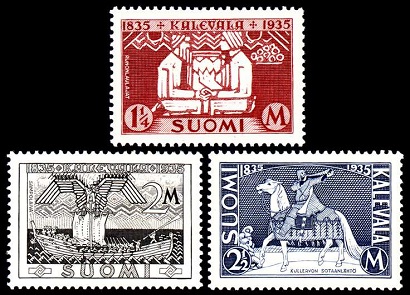 The three pictorial commemorative stamps of Finland shown above (Sc. #207-209) were issued on February 28, 1935 to celebrate the 100th Anniversary of the first Publication of the "Kalevala", the Finnish National Epic.

The Kalevala is a collection of epic poetry (or songs), compiled by Elias Lönnrot (1802-1884), from Karelian and Finnish oral folklore and mythology.  The Old Kalevala, published in 1835, contains 32 poems in 12,078 verses.  The New Kalevala, published in 1849, which most people read today, contains 50 poems.  The Kalevala has been translated into 61 languages, and it is Finland's most-translated work of literature.

The stories often involve the search to obtain a particular object, such as the Sampo, the most important element of the entire Kalevala.  The main characters in the stories often have to accomplish feats that are sometimes unreasonable or impossible, leading them to failure or humiliation.

The mythological stories / poems of the Kalevala are extremely complex.   For the visitor that is interested in exploring the Kalevala and its stories in depth, please follow the Wikipedia link in this paragraph.

The 2 M. denomination commemorative stamp shown above, at the left (Sc. #213), was issued on June 4, 1937 to celebrate the 70th Birthday of Field Marshal Mannerheim.


The 3.50 M. denomination commemorative stamp shown above, at the right (Sc. #214), was issued on June 1, 1938 to celebrate the 300th Anniversary of the Colonization of Delaware by Swedes and Finns. 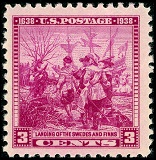 The United States also issued a 3 C. denomination commemorative stamp (Sc. #836) during June 1938 to commemorate the 300th Anniversary of the Swedish-Finnish Settlement at Wilmington, Delaware.  It is shown above. 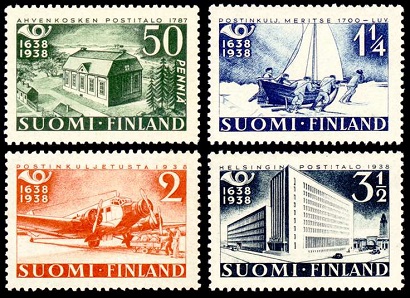 The four pictorial commemorative stamps of Finland shown above (Sc. #215-218) were issued on September 6, 1938 to celebrate the 300th Anniversary of the Finnish Postal System. 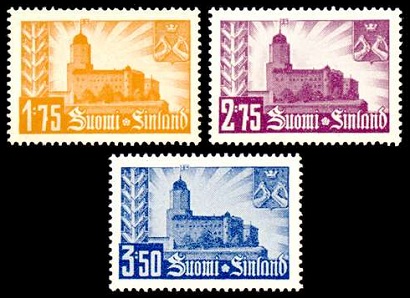 The three pictorial commemorative stamps of Finland shown above (Sc. #224-226) were issued on August 30, 1941 to publicize the Recapture of Vyborg.

The three common designs feature the 13th Century Vyborg Castle and the Coat of Arms of Karelia.

On August 29, 1941, the town was captured by Finnish troops.  However, during the Moscow Armistice of September 1944 and during the Paris Peace Treaty of 1947, the Republic of Finland relinquished all claims to Vyborg, and the area was returned to the Soviet Union. 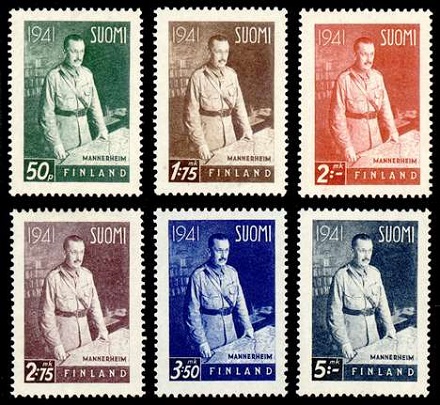 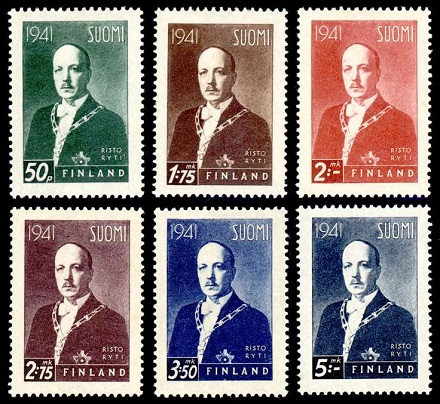 The twelve pictorial propaganda stamps of Finland shown above (Sc. #227-238) were issued on December 31, 1941 with the theme of their Fight for Freedom, during the Continuation War of 1941 to 1944, between the Republic of Finland and the Soviet Union.

Return to Stamps of Finland from
Commemoratives of 1935-1941 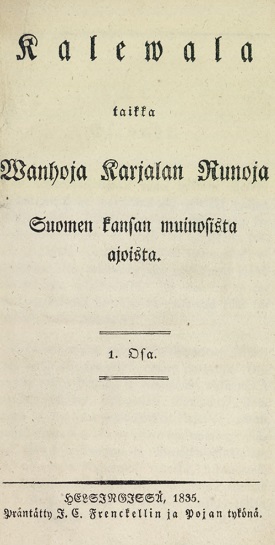 The title page above translates, as follows.

The 2 M. denomination stamp shown above (Sc. #220) was issued on May 1, 1940 to celebrate the 300th Anniversary of the Founding of the University of Helsinki.

President Kyöst Kallio (1873-1940) died from a heart attack on December 19, 1940, just a few seconds after the photograph used for the image on this stamp was taken.