The two commemorative stamps shown above, at the left (Sc. #141-142), were issued on December 6, 1927 to celebrate the 10th Anniversary of Finnish Independence. 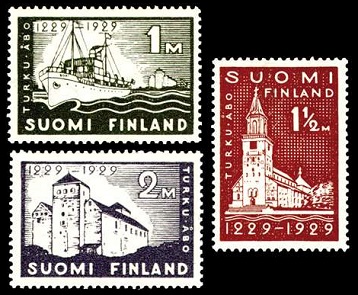 The three pictorial commemorative stamps of Finland shown above (Sc. #155-157) were issued on May 22, 1929 to celebrate the 700th Anniversary of the Founding of the City of Turku - Abo.

Turku (Finnish) - Abo (Swedish) is a city on the Southwest coast of Finland, at the mouth of the Aura River.  Turku is the oldest city in Finland, and for hundreds of years, as a commercial seaport, it was the most important city of Finland.  The word "turku", in Finnish, means "marketplace". 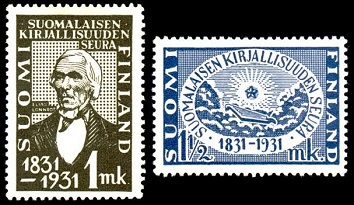 The two pictorial commemorative stamps of Finland shown above (Sc. #180-181) were issued on January 1, 1931 to celebrate the 100th Anniversary of the Finnish Literature Society.

The two designs are as follows.

The Finnish Literature Society, in Helsinki, was founded in 1831 to promote literature written in the Finnish language.  One of its first publications was the "Kalevala", the Finnish national epic.

Elias Lönnrot (1802-1884) was a Finnish physician and a collector of Finnish oral poetry.  He created "Kalevala" in 1835, based on traditional ballads and lyric poems about Finnish mythology that he documented during his travels.

The two pictorial commemorative stamps of Finland shown above (Sc. #182-183) were issued on February 28, 1931 to celebrate the 75th Anniversary of the First Postage Stamps of Finland.

The 2 M. denomination commemorative stamp shown above, at the left (Sc. #197), was issued on December 15, 1931 to celebrate the 70th Birthday of President Svinhufvud.

Pehr Evind Svinhufvud af Qvalstad (1861-1944) was a Finnish lawyer, judge, and politician, and he played a major role in the movement for Finnish independence.  He served as the Prime Minister of Finland from 1930 to 1931 and as the 3rd President of Finland from 1931 to 1937.

Aleksis Kivi (1834-1872) was a Finnish author.  He was one of the earliest authors of prose and lyrics in the Finnish language, and he is still considered one of the greatest of them all.

Return to Stamps of Finland from
Commemoratives of 1927-1934