The first stamps of Finland, issued for the purpose of raising money for charitable purposes, appeared in 1922.  These are regular definitive and commemorative postage stamps, but they have a "value added tax" or "surtax" on them, designed to raise money for national organizations, public events, and public charities.  In this category, they will be referred to as "Charity Stamps".

The surtax on most of Finland's charity stamps is for the benefit of the Red Cross Society of Finland.  If the surtax is for other charities, it will be mentioned below.

The design features the Coat of Arms of Finland, with a red cross over the lion.

The three surtaxed charity stamps of Finland shown above (Sc. #B2-B4) were issued on February 6, 1930.

The designs feature a red cross, along with a flag, a cloak and sword, and a Viking ship.

The three surtaxed charity stamps of Finland shown above (Sc. #B5-B7) were issued on January 1, 1931. 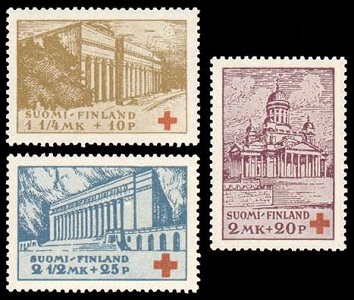 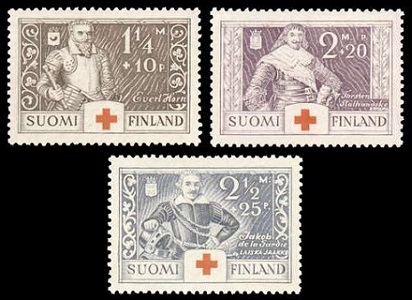 The designs, honoring important military leaders of the time when Finland was part of the Swedish Empire,  feature a red cross and the following.

Return to Stamps of Finland from
Charity Stamps of 1922-1934 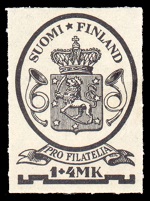 The design features the stylized theme of the first Finnish postage stamp, with the inscription "PRO FILATELIA" (Latin: For Philately).

The rather excessive surtax went to a fund to assist the Postal Museum of Finland in purchasing the Richard Granberg postal stationery collection.