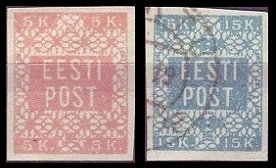 The first postage stamps of Estonia were put into use on November 22, 1918, less than two weeks after the end of World War I.

Perforation trials of the 15 K. denomination stamp, shown above, were ordered by the Estonian Postal Service.  The trials were made on printers-waste from the first and second printings, and they are perforated 11 1/2.  The trials were not considered successful, and further testing was canceled.  The exact number of stamps printed and sold is unknown.

This perforated 15 K. denomination stamp is the rarest of all the stamps of Estonia.  Only two or three covers with the stamp are known.  Mint singles are exceedingly rare.  It is estimated that 1,000 of them may exist.  Most of the stamps found in collections and on the philatelic market are forgeries or have private perforations.

The Estonians are a Finnic people, sharing close cultural ties with their Finnish neighbors to the north.  After many centuries of Danish, Swedish, German, and Russian rule, the Estonians were starting to yearn for independence, a historical period of the 19th Century called the National Awakening.  Their opportunity finally came, and, after the collapse of the Russian Empire in October 1917, the Republic of Estonia was declared on February 24, 1918.

Sadly, the new Estonian republic would only last about 22 years.  During World War II, Estonia was occupied by the USSR (1939-1940) and then by the German Third Reich (1940-1944).  By the terms of the Molotov-Ribbentrop Pact of 1939, Estonia was awarded to the USSR.  Not wanting to live under Communism, many Estonians fled to Finland and other European countries at the end of World War II.  The USSR re-occupied Estonia in 1944, after which it became the Estonian Soviet Socialist Republic.  The Estonian people would not gain their independence again for another fifty years! 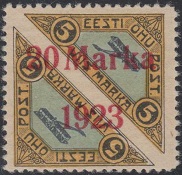 Not counting the Soviet and German occupation stamps and the 1919 Tallinn Provisionals, in the years between 1918 and 1940, the Estonian postal service issued 168 stamps and four souvenir sheets.  The stamps of the Republic of Estonia are not unreasonably expensive, and for the serious stamp collector, a nearly complete collection of the major postage stamp issues of Estonia is easily attainable.

Links to historical articles and reviews of many of the postage stamps of Estonia will eventually appear at the top of the third column of this page.

Return to Home Page from
Stamps of Estonia