Your friendly webmaster (ME) was recently deceived by stamp forgeries of the USSR. I had always thought that buying and selling stamps from such a "modern" (1922-1991) country would be safe from the standpoint of forgeries, but I guess I was mistaken!

I have specialized catalogs for Germany, Austria, Switzerland, and Italy, countries that I actually collect, but for the rest of the World, I use the Scott Standard Postage Stamp Catalog as a reference and for buying and selling stamps. For the small amount of Russian stamps that come my way, it wouldn't be worthwhile to buy an expensive Michel specialized catalog, and considering my knowledge of the Russian language, which ranges from very limited to none, the Russian specialized catalog would not be useful. Unfortunately, for people that rely on the Scott catalogs, detailed information about the technical aspects and forgeries for individual countries is almost non-existent.

I just can't imagine why someone would forge a modern stamp that has a market value of less than $2.00. But, if you consider the forged overprints that exist on the Russian Civil War stamp issues, when many of them are worth only a few pennies each, anything is possible! 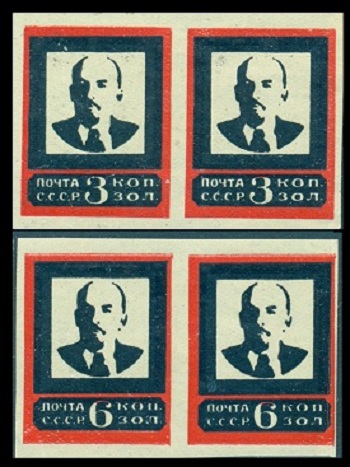 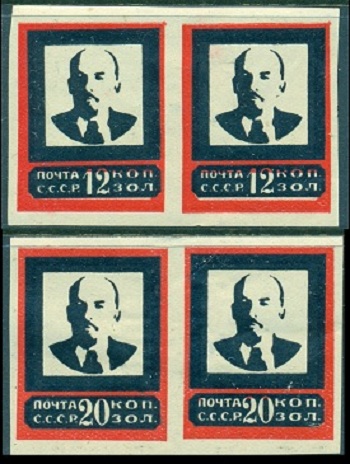 A while back, I acquired the four pairs shown above from a small Russian collection I bought from a major auction house. The four stamps were issued in 1924, as a memorial to the recently deceased Vladimir Lenin. The Scott Catalog indicates that they were issued both perforated 13 1/2 and imperforate, with there being three printings of the imperforate stamps, differing in the sizes of the red frames. The catalog does indicate that forgeries of the issue exist, but no further information is provided. The stamps have a catalog value of $3.00 each in my 2008 Scott catalog.

I sold these four pairs through my eBay store, and the specialist that bought them indicated to me that they are stamp forgeries. I did further research on the internet and found this to be true. I found an exhibit frame which shows the differences.

The easiest way to tell is by the shading lines of Lenin's hair and his ear on the right side of his face (to the viewer).

On the authentic stamps (shown below), the shading of Lenin's hair on the right side of his face is thin, and the line indicating the outside and middle of his ear is thin.

On the stamp forgeries (shown above) the hair on the right side of Lenin's face is thicker, and the shading on his ear is very thick. The shadow on the left side of his face is also darker, and it almost completely obscures his eye.

On the three printings of the imperforate stamps, the frame measures 20 x 25 mm, 20.5 x 26 mm, or 21 x 26.5 mm. Any imperforate examples that do not match these measurements are likely forgeries, as well. 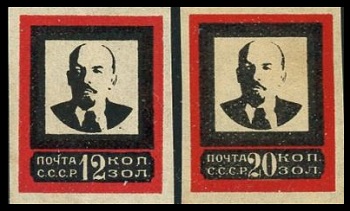