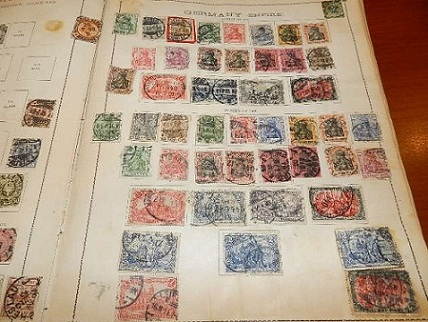 Stamp condition nightmares have affected all of us at one time or another. They are generally the result of buying collection lots at auction, based on a seller's erroneous description, without having inspected the collection first.

It happened to me years ago. I bought a Russian collection on Scott International pages through an online auction. When I received it, most of the stamps were stuck down to the pages or had been damaged in other ways.

This type of stamp condition happened to one of my website visitors. Here is the sad story and some guidelines for how one might go about trying to salvage some of the nicer material.

Lets get some historical perspective here. 19th Century and early 20th Century collections can look wonderful, but they may present a lot of problems. Though stamp collecting had been a hobby for over 100 years, collector attention to stamp condition and preservation, stamp mounts, and quality stamp stock sheets and stock books, made of inert materials with clear slides for display, did not evolve until the late 20th Century.

Stamp collecting albums first appeared in the 1860's. The early albums were very primitive, and early stamp collectors didn't have the education or technology that we use today for preserving classic postage stamps. Mint stamps were easy to mount ... the collector just licked the gummed side and stuck the stamp in the appropriate square on the paper page.

Used stamps were problematic. In many instances, collectors would "glue" the used stamps to the pages, using mucilage, a common household adhesive of the time. Of course, in many instances, this adhesive bled through the stamp paper over a long period of time, destroying what may have been a very valuable stamp. Some of the more sophisticated collectors of the time would cut strips of gummed paper (predecessor to hinges), fold a tiny piece, and glue one end of it to album page and the other end to the back of the stamp. These early "hinges" could severely affect stamp condition, as well, and even today, with extensive soaking, they can be very difficult to remove, without further damaging the stamp.

Back in 2012, I received a website contact form message from a website visitor that was a history buff and that had just started to become interested in classic postage stamps. He had won a 1909 Scott Postage Stamp Album, with stamps in it, at an auction, and he sent me scans of the German Empire page to look at for him. They are used in this article. 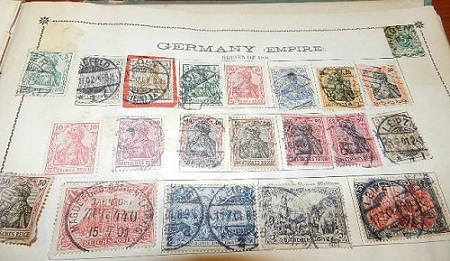 I took a quick glance at his scans, then enlarged them a bit in my viewer .... I WAS ASTOUNDED! Though the Reichspost and Deutsches Reich issues are mixed up on the album page, he had what appeared to be the complete 1900-01 Reichpost Issue, through the 5 MARK DENOMINATION (Type II). The 1 MARK and 3 MARK denominations of the set also had RAILWAY POSTMARKS! The Five Mark had a turned corner and what looked like a few folded perforations on the left, with the possibility of a small perforation tear .... BUT, due to its value, if properly preserved, it is STILL A VERY COLLECTIBLE STAMP.

It may not have been terribly unusual for someone collecting in 1909, eight years after these stamps were issued, but to find the high value Reichspost definitives and the VERY VALUABLE 5 Mark Reichpost denomination in a general worldwide collection today, would be extremely unlikely. 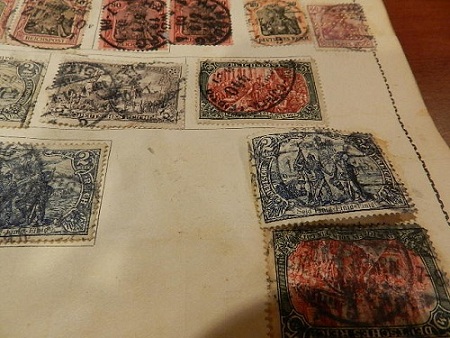 I replied to the message and recommended that the visitor carefully remove the Reichpost stamps, especially the high value denominations, from this album, press them good, then store them in a quality stock book to preserve the stamp condition, because some of them, especially the 5 MARK, were very valuable.

In taking another look at his scans, I noticed that the stamp in the 5 Mark denomination space for the 1902 Deutsches Reich set was ANOTHER 5 MARK REICHPOST (Type II) denomination! And this one had a RAILWAY POSTMARK as well! The stamp condition appeared to be sound, at least from the front. The actual 1902 Five Mark stamp is located in the blank area at the bottom of the album page. THIS WAS UNBELIEVABLE!

He later responded that all of the stamps were stuck to the album paper, either by excessive hinging or by "glue". The collector's worst stamp condition nightmare!

Soaking an entire album would not be worthwhile for one containing inexpensive early modern stamps, but in this case, it might be worth the time-consuming effort that is required. The following process may or may not work ... I've used it before, with mixed results, but it may help to salvage some of the valuable stamps from any valuable, early collection.

CAUTION: Wet stamps are very fragile, and can tear very easily. Use good stamp tongs to carefully remove each stamp that is floating in the water.


This time the process worked!  In fact, I bought the German stamps from my website visitor, and they now reside in my specialized German Empire collection!!


Return to Stamp Condition From