If stamp condition in respect to early imperforate stamps seemed bad, the onset of the perforating of postage stamp sheets was a condition horror!

In the mid-1850's the U.S. Post Office began testing new perforating equipment acquired from Great Britain. In early 1857, the first officially perforated sheets of U.S. stamps were distributed to post offices for sale to the public. The initial results, for philatelists, were a disaster! 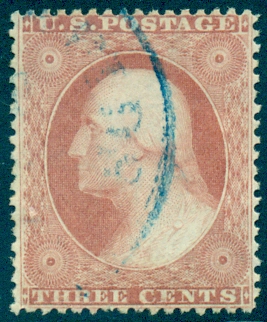 The GEM at right (U.S. Scott #25 - Position 53L5L), from the 1851 3 Cent Issue - Plate 5, shows clearly the problem with the perforations fitting around the impression. The frame lines at the top and bottom are beyond the boundaries of the perforations. This example, as far as stamp condition and centering, would be considered an Extremely Fine stamp. The design is well balanced between the top and bottom rows of perforations, and the centering at the sides is almost perfect. In 1857, the post office modified the design of the 3 Cent stamp, by removing the top and bottom frame lines. That helped a little, but the majority of the sheets printed and perforated with the new designs implemented in 1857 still have very poorly centered stamp impressions.

And then there was another problem with the new perforated stamps. The public, as well as many postal clerks, had been separating stamps with scissors for many years, and many of them had no clue what the new holes between the postage stamps were for. For some time after the release of the perforated stamps, people still continued to cut the sheets apart with scissors, which resulted in the mutilation of both the perforations and the stamps.

Even as late as the 1870's, when the U.S. Post Office made Special Printings of all the previous U.S. stamp issues for collectors, the clerks at the post office in Washington D.C. cut the stamps apart with scissors, when they mailed the special stamps to collectors who had ordered them. Thus, most of the existing Special Printings, today, are mutilated. In this case, the stamp condition is overlooked, as the auction prices, even for mutilated copies, are very high.

Even with the production of early modern stamps, there were still some issues with stamp condition, in regards to the perforation process. One must remember that the stamps were perforated, AFTER the sheets were printed. 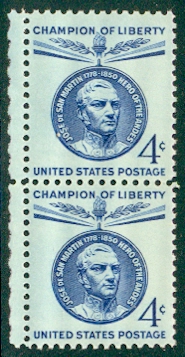 The example at left shows a pair of the Jose de San Martin 4 Cent stamp issued in 1959. The stamp at the top appears shifted down, whereas the stamp at the bottom appears to be pretty well centered. Actually, with modern technology, the stamp impressions on the plate have PERFECT spacing! In this case, it is the PERFORATING equipment that is not aligned properly on the sheet of stamps. Since this is all done by high speed equipment now, this is not uncommon.

Some of the stamp issues of the early 20th Century were very poorly perforated, and as a result, the difference in price between an Average and a VF centered stamp can be very great.

On modern stamps, printed after 1935, this also happens, but as they are low priced and there are many millions of them available, collectors can afford to select the best centered examples, with the poorly centered examples being discarded or used for postage.