Determining stamp condition, with respect to centering, on 19th Century imperforate stamps, can be complex, due to factors in their manufacture, distribution, and over-the-counter sales.

One must remember that the precise printing technologies that we have today did not exist in the mid-19th Century, thus determining condition is a completely different matter.

Dies were made by hand, the plates were laid down by hand, the printing was done on primitive presses, and the stamp sheets / panes were trimmed by hand for sale to the public. There was a lot of room there for HUMAN error! That is why we have so many die varieties, plate varieties, printing errors, etc. on classic stamps, which philatelists relish researching today.

As far as stamp condition, every collector wants attractive, well centered stamps in their collections, but with some of this early material, that is just impossible. For evaluating centering on these issues, we must BEND our 20th Century stamp grading criterion a bit, to compensate for irregularities in manufacturing.

First we have to consider how the designs were transferred from the die to the printing plate. Usually, alignment dots were drawn on the plate by hand, then the die was manually aligned at the corner, corresponding to each dot, then rolled onto the plate. This was done repeatedly, 10 columns across and 10 impressions down the sheet, in the case of U.S. stamps. Since this process was done by hand and by various individuals, the positioning of the impressions on the plate did not always follow the alignment dots. In those days, nothing was discarded, and tools were used until they were completely worn out. 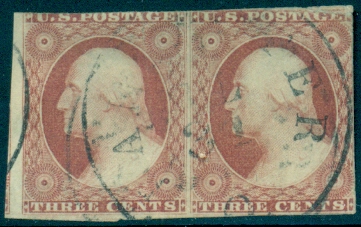 The pair of U.S. Scott #11, the 1851 3 Cent Issue, shown above, is an excellent example of the irregularities of manual die impression placement on the plate, and how it can affect stamp condition. You can actually see three positions on this pair. The frame line of the left-most position is seen at the left edge of the pair. The spacing between the middle and right positions is about 1 mm, with the frame lines very close together, whereas the spacing between the left-most position, indicated by the frame line on the left edge of the pair, and the middle position is much greater. This is a common occurrence with the 1851 3 Cent Issues. Can you imagine trimming the between these two positions, so one of the stamps will have VF centering, with even margins all around? Could you imagine what would happen at the post office, when a postal clerk either cut or tore these stamps apart for sale to a customer?

The same is true for a lot of stamp issuing countries.  During this time period, especially with Great Britain, some their sheets were printed with the impressions spaced very close together. On one example of the 10 Pence Issue that I have seen a picture of, the plate positions actually overlap each other.

On the other hand though, the impressions of the stamps of the Austrian Empire were spaced far apart on the plates, thus well centered specimens with wide margins are fairly common.

To make matters worse, we have to look at what was done to prepare the stamps for sale at the U.S. Post Office. Ever wonder why vertical pairs, blocks, margin inscription examples, and plate number examples of early U.S. imperforate stamps are so RARE? When the sheets were cut into panes and delivered to the post office, the postal clerks would cut off the outside margins, containing the inscriptions and plate number, and then discard them. Then they would cut the panes into horizontal rows of 10 stamps each. To the harried postal clerks, stamp condition meant cutting a stamp so it would be valid for postage and nothing more. Many are cut along the frame lines of the stamps, I would suppose this having been done by the postal clerks in order to cut in a straight line with their scissors. When selling stamps to a customer, they would either cut off, or sometimes tear off, one or more stamps from the horizontal strip in their drawer, and hand the stamps to the postal customer.

In 1851, $3 for a pane of 100 stamps was a tremendous amount of money to most people. It was usually business people that bought entire panes of stamps for commercial mailings, and that is probably where the majority of the strips and blocks that we know of the issue come from.

Taking all of this into consideration, in evaluating stamp condition, a stamp from this era with even the tiniest of clear margins, just barely clearing the frame lines of the stamp, is considered to have VF centering. These stamps, with four wide, even margins can go for 10 to 15 times the catalog value.

To get an example of the 3 Cent 1851 Issue with wide, even, white margins all around, one would possibly have to cut the stamp to where the edges of the four stamps above, below, and to the sides of the particular position would be completely destroyed. I don't imagine that the average postal clerk would have had this in mind, and such examples on the market were probably intentionally cut from large multiples by stamp collectors!

As is always the case, determining overall stamp condition for these early imperforate issues is a matter of STUDY and KNOWLEDGE.

Return to Stamp Condition from Stamp Centering I