For commemorative regular-postage Spanish stamps, 1930 was a HUGE year.  During what would be the final year of the Spanish monarchy, there were only five commemorative events, but a total of sixty-three regular-postage stamps were issued.  And, this number does not include the airmail stamps and supplementary stamps that were also issued for these events, which are not included in this category-page!

Most of the commemorative postage stamps of 1930 also exist imperforate and with various printing and perforation errors, having been privately produced and then sold to the Spanish postal authorities.  Forgeries and reprints of some of the stamps are also known.  Please see the major catalogs or the specialized Spanish stamp catalogs for further details. 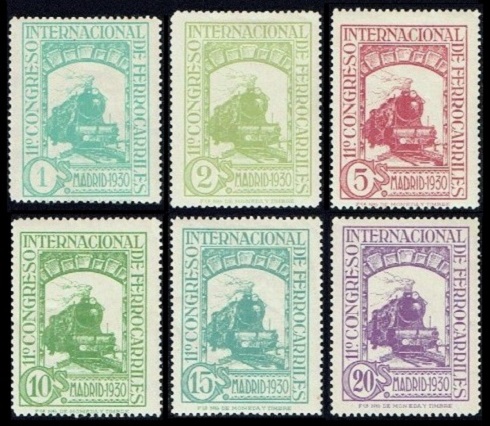 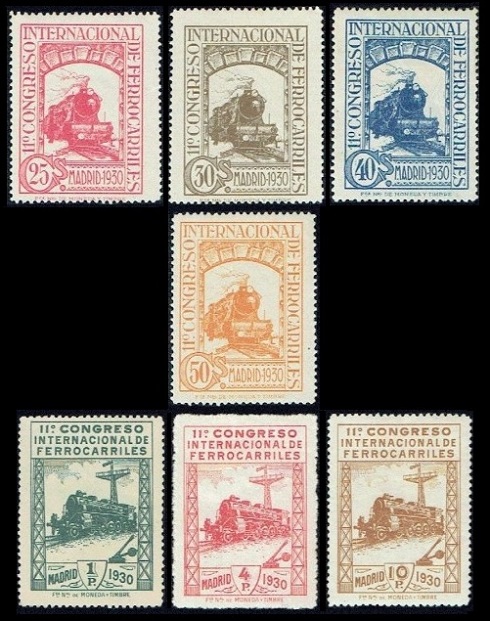 The thirteen pictorial commemorative Spanish stamps shown above (Sc. #373-385) were issued on May 10, 1930 to publicize the 11th International Railway Congress held in Madrid.

These stamps were only sold between May 10 and May 21, at the Palace of the Senate in Madrid and at the Barcelona and Seville Expositions. Forgeries of these stamps exist. 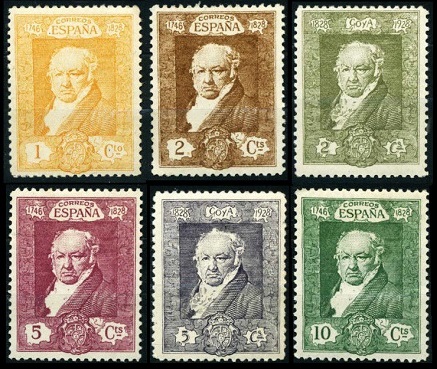 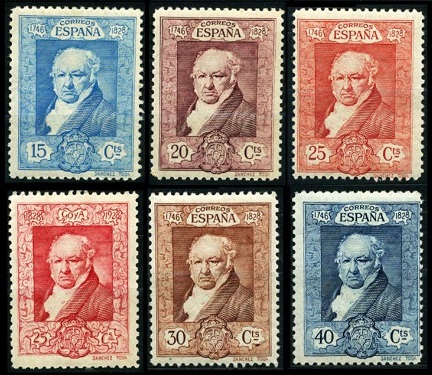 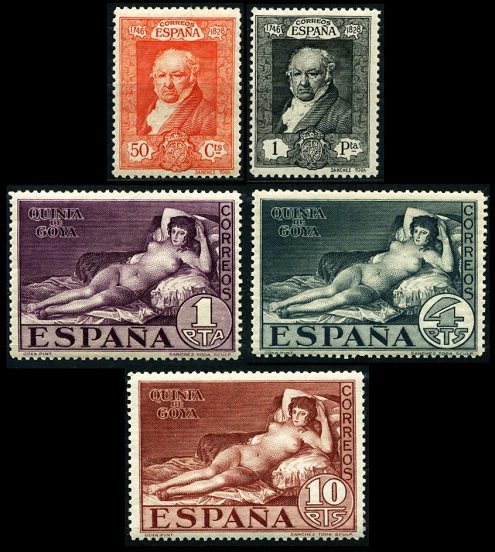 The seventeen pictorial stamps shown above (Sc. #386-402) were issued on June 15, 1930 to commemorate the 100th Anniversary of the Death of Francisco de Goya y Lucientes in 1828.  This set of stamps was issued in conjunction with the Iberia-American Exposition, held in Seville between May 1929 and June 1930.

Majos (masc.) or Majas (fem.) were people from the lower classes of Spanish society during the late 18th Century.  They distinguished themselves by their elaborate manner of dress and their cheeky mannerisms.  These people were a popular subject for many late 18th Century and early 19th Century Spanish painters. 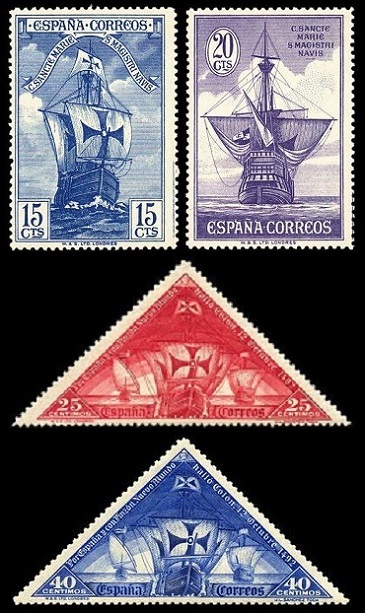 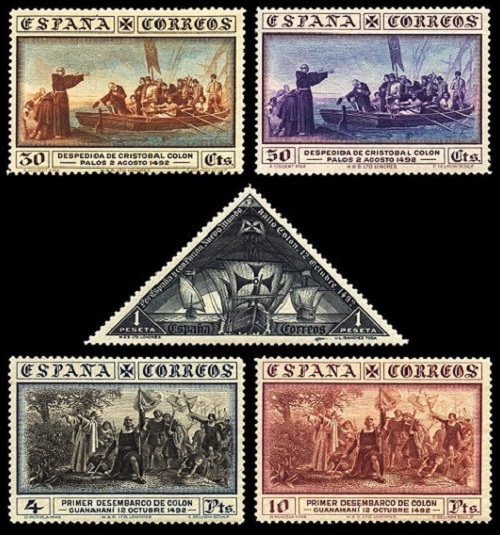 The fifteen grand-looking pictorial commemorative Spanish stamps shown above (Sc. #418-432) were issued on September 29, 1930 as a tribute to Christopher Columbus and the Discovery of America.

The five common designs, as they appear in the set, are as follows. 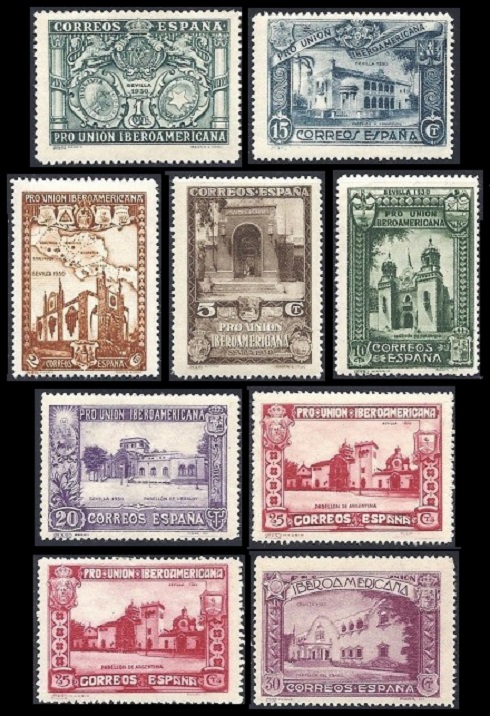 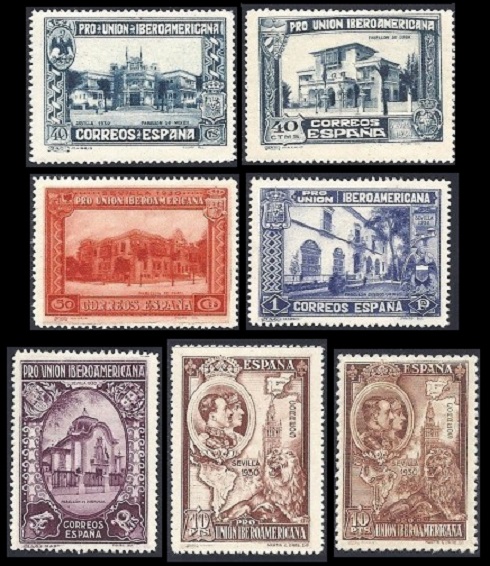 The sixteen pictorial stamps shown above (Sc. #433-448) were issued on October 10, 1930 to celebrate the Iberia-American Union Exhibition, held in Seville.

Reprints have blurred colors, yellowish paper, and an inferior gum.  They are practically worthless.

Return to Spanish Stamps from
Commemoratives of 1930

The two 5 C. denomination stamps shown above (Sc. #371-372) were issued in 1930 for the Barcelona Philatelic Congress and Philatelic Exhibition.

The common design features the exhibition building and the inscription "EXPOSICION DE BARCELONA 1930".  The small letters at the bottom are the abbreviation for "CONGRESO FILATELICO y EXPOSICION FILATELICA".

The holder of an admission ticket, costing 2.75 Pesetas, was allowed to buy one of each of these stamps.

In searching the internet for information on these stamps, I found some specialized Spanish websites having examples of them in various colors, both perforated and imperforate.  Unfortunately, other than the Scott catalog, I have no other available reference information for these varieties. 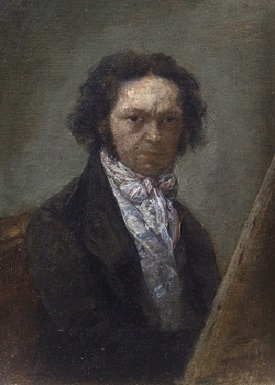 Francisco José de Goya y Lucientes (1746-1828) was a Spanish Romantic Era painter and print maker.  He is considered the most important Spanish artist of the late 18th Century and the early 19th Century.  His paintings were a commentary and chronicle of the events he experienced during his lifetime.

Beginning in 1793, his paintings became increasingly darker in tone, reflecting a bleak outlook on his personal, social, and political feelings of the time.

After the invasion of Spain by Napoleon Bonaparte in 1807, Goya chronicled the ensuing Peninsular War (1807-1814) in his "Disasters of War" prints (published after his death) and in his contemporary paintings of the conflict.

Other works, from the period between 1797 and 1823, include his dark series of etchings, called the "Caprichos" and "Los Disparates".   His work, during this time, often invokes the themes of insanity, asylums, witches, and fantastic creatures, as well as religious and political corruption. 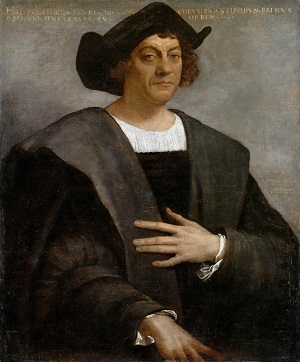 Cristoforo Colombo (1451-1506), also called Cristóbal Cólon (Spanish) and Christopher Columbus (Latin / English), born in the Republic of Genoa, was an Italian explorer, navigator, and colonizer.  Columbus was an ambitious youth.  He learned Latin, Portuguese, and Castilian.  He also read extensively about astronomy, geography, and history.

During the late 15th Century, the only way to reach the lucrative trading centers of Asia was either by land or by sailing around the Southern tip of Africa and across the Indian Ocean.

During the later part of the 15th Century, Columbus envisioned a short-cut to Asia, by sailing from the Canary Islands, Westward, across the Atlantic Ocean.  Between 1485 and 1488, he lobbied King John II of Portugal to provide funding for his expedition, but his request was rejected.  Afterwards, he lobbied both Genoa and Venice, but they likewise rejected his proposal.

Columbus then appealed to Queen Isabella of Castile and King Ferdinand II of Aragon.  After two years of negotiations, the two Spanish Monarchs agreed to Columbus' proposal in January 1492.  In April 1492, King Ferdinand II and Queen Isabella promised Columbus that if he succeeded, he would be given the rank of Admiral of the Ocean Seas and he would be made the viceroy and governor of all the lands that he could claim for Spain.

On the evening of August 3, 1492, Columbus sailed from Palos de la Frontera, with his fleet of three ships, to the Canary Islands.  On September 6, 1492, he began his voyage Westward from the Canary Islands.  Five weeks later, on the morning of October 12, 1492, land was sighted!  Columbus called the island that they had sighted "San Salvador" (meaning "Holy Savior").  The indigenous natives there referred to the island as "Guanahani".  This island is believed to have been located in what would eventually be known as the Bahama Islands, but its identity and location are uncertain today.

Even after four voyages to the New World, between 1492 and 1504, Columbus never accepted the fact that he had discovered a new continent.  He always insisted that the lands he had visited were part of the Asian continent.  His refusal to accept that the lands he had claimed for Spain were not part of Asia might explain why the New World was named "America", after the Florentine explorer Amerigo Vespucci and not after Christopher Columbus.

What Columbus DID succeed in doing though was in establishing the emergence of the Spanish Empire and in triggering the European exploration, conquest, and colonization of the Americas that would last for the next four centuries!