Definitive airmail Spanish stamps first appeared in 1920.  Most of the later airmail stamp issues were commemorative in nature, usually being extensions of commemorative regular-postage stamp sets for the same events.

Many of the commemorative airmail stamps of 1930 also exist imperforate and with various printing and perforation errors, having been privately produced and then sold to the Spanish postal authorities.  Please see the major catalogs or the specialized Spanish stamp catalogs for further details. 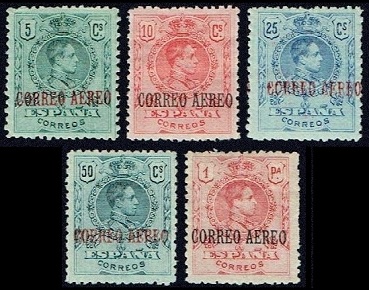 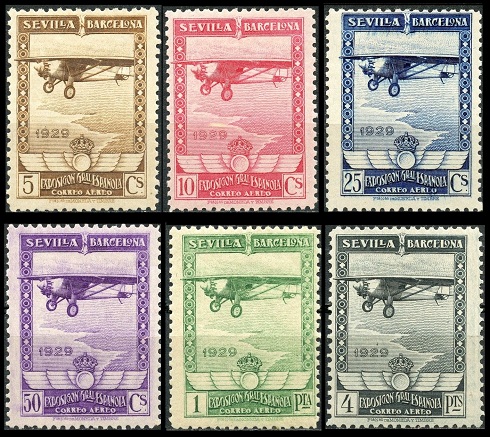 The six commemorative airmail stamps shown above (Sc. #C6-C11) were issued on February 15, 1929 to publicize the Seville and Barcelona Exhibitions.

The common design features "The Spirit of St. Louis" flying above the coast of Europe. 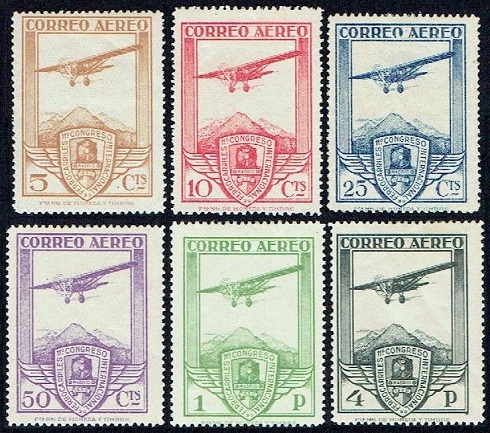 The six commemorative airmail stamps shown above (Sc. #C12-C17) were issued on May 10, 1930 as the airmail component of the 11th International Railway Congress regular-postage commemorative set.

The common design features a Bristol monoplane over a mountainous landscape and the Railway Congress seal. 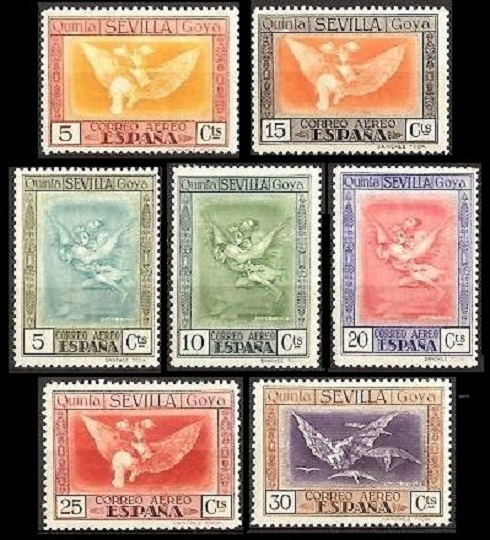 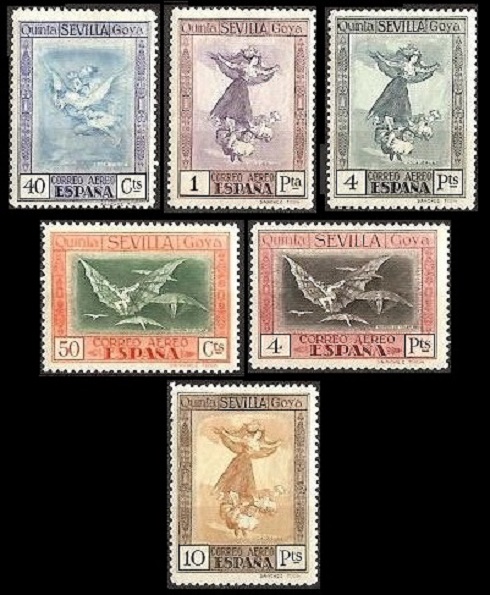 The thirteen pictorial airmail stamps shown above (Sc. #C18-C30) were issued on June 15, 1930 to commemorate the 100th Anniversary of the Death of Francisco de Goya y Lucientes in 1828.  This set of airmail stamps was issued in conjunction with the Iberia-America Exposition, held in Seville between May 1929 and June 1930.

The four common designs, based on Francisco Goya's etchings in "Los Caprichos" and in "Los Disparantes", illustrate the "Fantasy of Flight" theme of these airmail stamps.  Please see the images and text content in column three of this page for additional information. 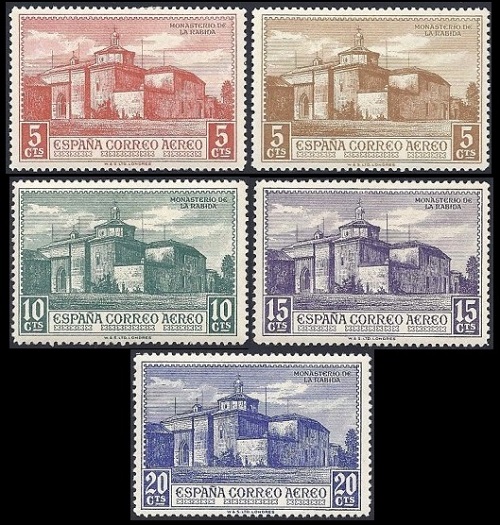 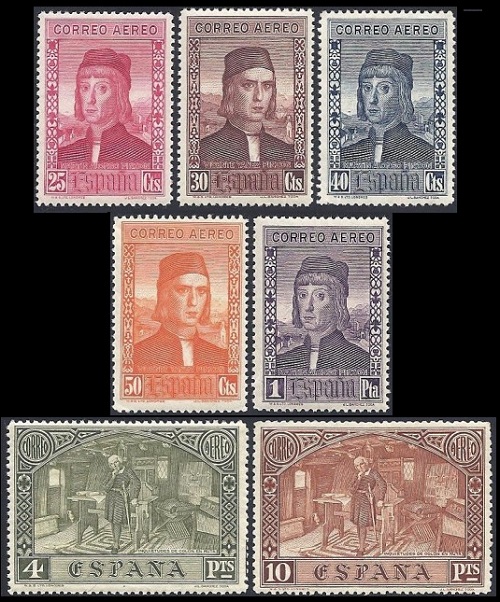 The twelve pictorial commemorative airmail stamps shown above (Sc. #C41-C42) were issued on September 29, 1930 as a tribute to Christopher Columbus and the Discovery of America.

The four common designs, as they appear in the set, are as follows. 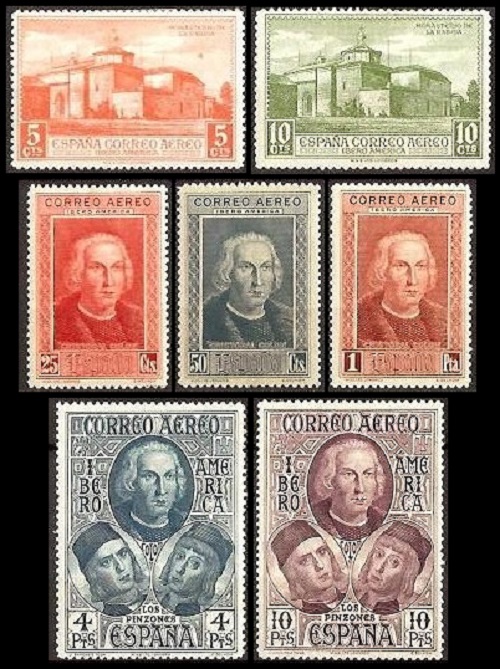 The seven pictorial commemorative airmail stamps shown above (Sc. #C41-C42) were issued on September 29, 1930 to celebrate the Iberia-America Union Exhibition, held in Seville.

The three common designs, as they appear in the set, are as follows. 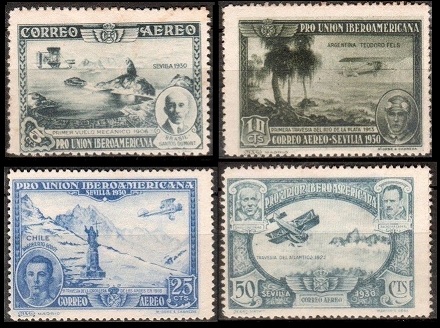 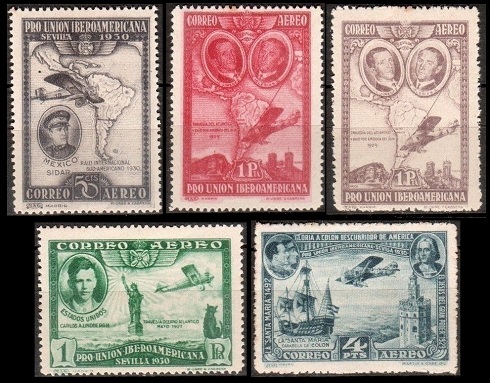 The nine airmail commemorative airmail stamps shown above (Sc. #C41-C42) were issued on October 10, 1930 to celebrate the Iberia-America Union Exhibition, held in Seville.

The eight common designs, as they appear in the set, are as follows.

Reprints have blurred colors, yellowish paper, and an inferior gum.  They are practically worthless.

Return to Spanish Stamps from
Airmail Stamps of 1920-1930

A 30 C. (green) denomination overprinted airmail stamp was authorized during 1920, but it was never officially issued.  This un-issued stamp is occasionally available on the philatelic market, but it is usually very expensive.

An example, from a 2011 Kelleher auction sale, is shown in the image above.  A footnote in the 2018 edition of the Scott catalog has a mint-lightly-hinged example priced at $550.00.

The four images shown above were used for the central designs of the Death of Francisco Goya commemorative airmail stamps of 1930.  These airmail stamps were designed to reflect the theme "Fantasies of Flight".

These rather macabre looking etchings were part of two collections of drawings produced by Francisco José de Goya y Lucientes (1746-1828) between 1799 and 1823.

Los Caprichos (English: "Fantasies" or "Whims") is a set of eighty prints, published in an album during 1799.  The prints were a medium for Goya's condemnation of the universal follies and foolishness in the Spanish society in which he lived.  Goya withdrew the prints from public sale, after only twenty-seven albums had been sold.  He later admitted that he felt it prudent to do so, considering the ongoing Spanish Inquisition.

Los Disparates (English: "Follies") is a collection of twenty-two prints, produced between 1815 and 1823.  The prints in Los Disparates feature dark, dream-like scenes that may have been related to the contemporary political climate, Spanish traditional proverbs, or the Spanish carnival.

Goya refused to publish the prints during his lifetime, due to his fear of the oppressive political climate and the ongoing Spanish Inquisition.  The prints were first published in 1864 by the Royal Academy of Fine Arts of San Fernando, under the title "Proverbios" (English: "Proverbs").