For definitive Spanish stamps, this was a transitional period between the provisional government and the later re-establishment of the Bourbon monarchy.

The leaders of the Provisional Government that overthrew Queen Isabella II did not have the intention of completely abolishing the monarchy.  Their vision was of a constitutional monarchy with both a popularly elected parliament and a popularly elected monarch.  Of course, this was never going to succeed!

Don Francisco Serrano y Dominguez, the First Duke of La Torre, Military Commander of Spain, also known as General Francisco Serrano (1810-1885), was the Prime Minister of the Provisional Military Government during 1868 and 1869, and he was the Regent of Spain from June 18, 1869 to September 27, 1870.  His rule was impartial and he always respected the independence of the Spanish legislature (Cortes Generales). 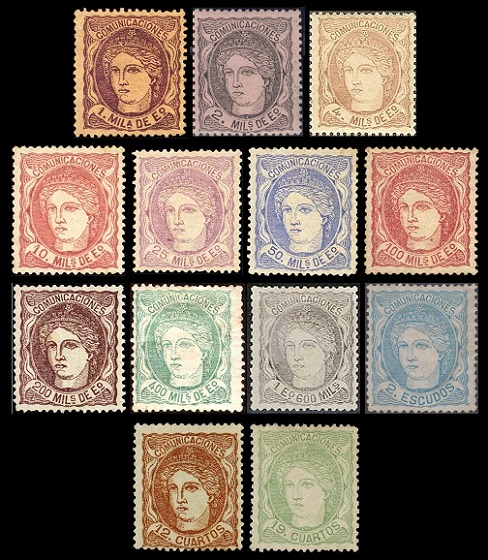 The twelve new definitive Spanish stamps shown above were issued on January 1, 1870.  Their designs feature the allegorical profile of España.

The first ten  stamps shown in the image above are denominated in Milesimas and Escudos.

The last two stamps shown in the image above are denominated in Cuartos (Reales).

His reign was troubled by growing republicanism in Spain, Carlist rebellions in Northern Spain, and the independence movement in Cuba.  King Amadeo I abdicated the Spanish throne on February 11, 1873, after a reign of only two years, after which he returned to his home in Italy. 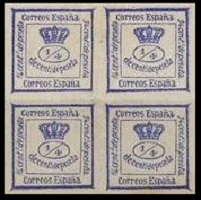 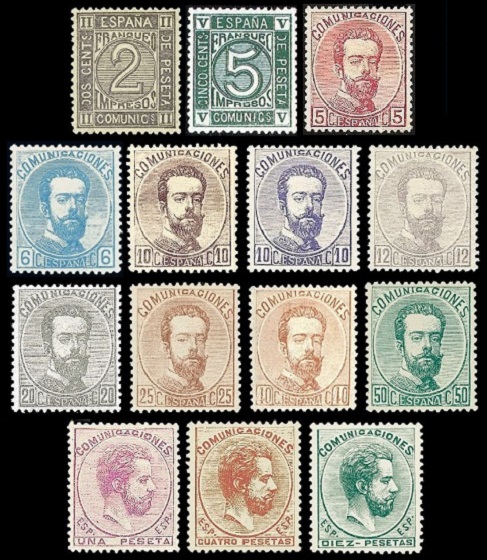 The fifteen new definitive Spanish stamps shown above were issued in 1872 and 1873.  Most of the designs feature the portrait of King Amadeo I.

These Spanish stamps are denominated in Centimos and Pesetas.

Following the abdication of King Amadeo I, the Spanish legislature declared the First Republic of Spain on February 11, 1873.  The short-lived republic was characterized by political and social instability and by violence, and the republic collapsed at the end of December 1874. 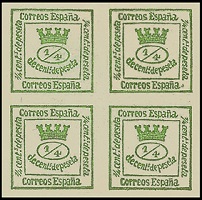 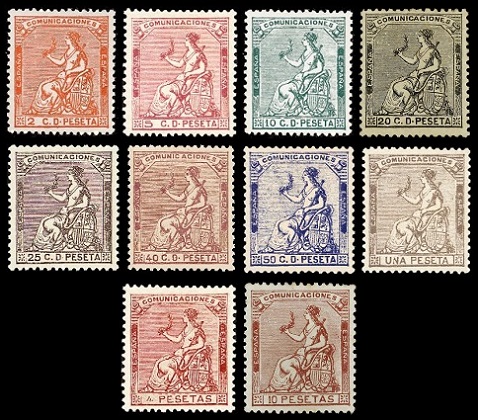 The eleven new definitive Spanish stamps shown above were issued on July 1, 1873.  Most of the designs feature an allegory of the seated figure of España, resting her arm on a shield and holding a spear and an olive branch.

These new stamps are also denominated in Centimos and Pesetas. 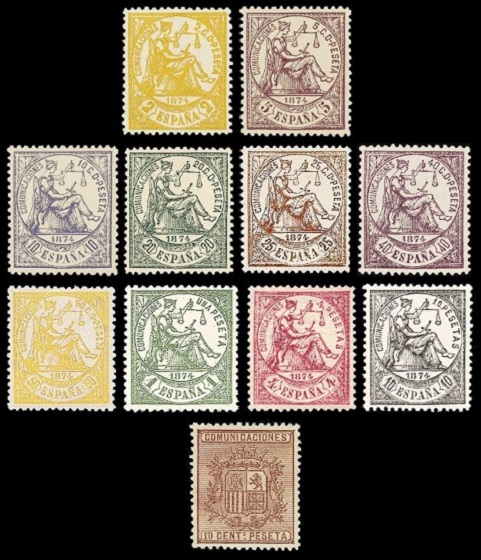 The eleven new definitive Spanish stamps shown above were issued between July 1, 1874 and October 1, 1874.  All but one of the designs feature an allegory of the seated figure of Justice, holding a sword and the Scales of Justice.  The design of the 10 C. denomination shown above, at the bottom, features the Coat of Arms of Spain.

Return to Spanish Stamps from
Definitives of 1870-1874

Stamps of 1854 to 1882 that are canceled with parallel horizontal bars or lines are REMAINDERS.  Though these are the original stamps, these remainders are worth only a fraction of the prices of the original stamps with contemporary postal cancellations.