The first perforated Spanish stamps appeared at the beginning of 1865.  Because of the additional spacing needed for the rows of perforations, many of the earlier perforated stamps of Spain, as a general rule, are very badly centered.

This five year period may seem very short, but there were momentous changes during this time.  TWO new decimal currencies were implemented, the reigning monarch was overthrown, and a new provisional government was established.  These changes were well documented by the definitive postage stamp issues of this period. 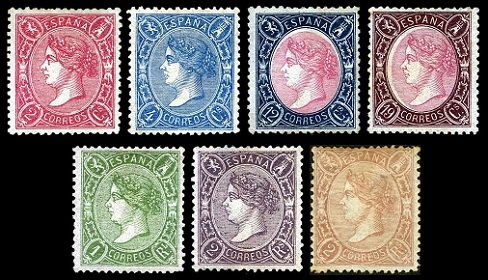 The seven new perforated definitive Spanish stamps shown above were issued in early 1865.  They are lithographed on white, unwatermarked paper and they are perforated 14. 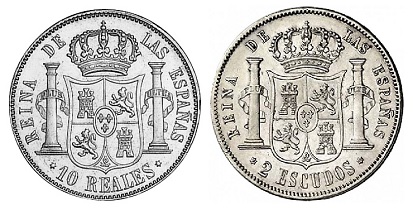 Again, in 1868, following Spain's entry into the Latin Monetary Union, the contemporary currency of the Spanish Empire, the Escudo, was replaced by another new decimal currency, the Peseta (100 Centimos = 1 Peseta).  The Peseta continued, as the currency of Spain, until it was replaced by the Euro in 2002.

In a deviation from the Scott Catalog numbering sequence, the stamps below are grouped by the particular currency in which they are denominated.

The four new definitive Spanish stamps shown above were issued on January 1, 1866.  They are lithographed on unwatermarked paper and they are perforated 14.  This group of stamps is denominated in Cuartos (Reales).

The three new definitive Spanish stamps shown above were issued during 1866.  They are lithographed on unwatermarked paper and they are perforated 14.  This group of stamps is denominated in Centimos and Escudos. 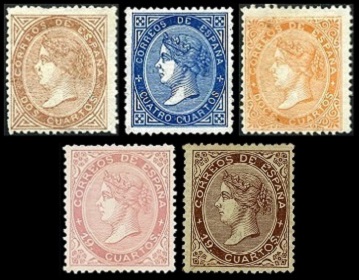 The five new definitive Spanish stamps shown above were issued between 1867 and 1869.  This group of stamps is denominated in Cuartos (Reales). 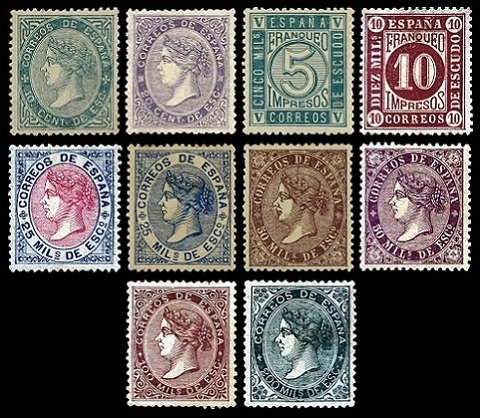 The ten new definitive Spanish stamps shown above were issued between 1867 and 1869.  This group of stamps is denominated in Centimos and Milesimas. (Escudos).

The Spanish Glorious Revolution of 1868 successfully deposed Queen Isabella II and established a provisional military government (Junta) in Spain.  The revolution was led by General Juan Prim (1814-1870) and General Francisco Serrano (1810-1885), who quickly gained the support of the Spanish army and navy.   Queen Isabella fled into exile in France, where she remained until her death in 1904.

Francisco Serrano, the First Duke of Torre, was named regent and became the titular ruler of Spain.  These would be very uncertain times.  Between 1868 and 1875, Spain would see the establishment of a provisional military government, a regency, a king from the House of Savoy, the Spanish 1st Republic, and the restoration of the monarchy of the House of Bourbon.

During the Spanish Glorious Revolution, in 1868 and 1869, remaining stocks of unused Queen Isabella II postage stamps were hand-stamped "HABILITADO POR LA NACION" (English: "Validated for the National Government") or "Habilitado por la Junta Revolucionaria" (English: "Validated for the Revolutionary Military Government") in various formats, as shown in the examples above.

The Madrid hand-stamp was the "official" provisional government hand-stamp.  The other five varieties are provincial hand-stamps.

These hand-stamped overprints are one of the great "minefields" of Spanish philately.  The Scott catalog prices for all of the Spanish stamps with these major hand-stamped overprints are not terribly unreasonable, yet the stamps appear to be much scarcer than the catalog prices would indicate.  In searching the internet for images of these overprints (in English and in Spanish), I found that hand-stamp examples on the Spanish colonial stamps of Cuba and Philippines were abundant.  However, hand-stamp examples on the stamps of Spain were almost non-existent.  I also noted that there were many irregularities and positioning errors for the six major hand-stamp types shown above.  To make matters worse, the Scott catalog indicates that forgeries of all these hand-stamps exist!

Fortunately, these provisional hand-stamped overprints would be replaced by regular, printed definitive postage stamps for the new regime at the beginning of 1870.

Return to Spanish Stamps from
Definitives of 1865-1869

Stamps of 1854 to 1882 that are canceled with parallel horizontal bars or lines are REMAINDERS.  Though these are the original stamps, these remainders are worth only a fraction of the prices of the original stamps with contemporary postal cancellations.

There are forgeries and reprints of many of the more valuable definitive postage stamps and provisional government overprints of Spain.  One should be very careful, when buying any of the more expensive stamps.  It is a good idea to only purchase  authenticated or certified stamps from reputable dealers that are experienced in early Spanish philately.