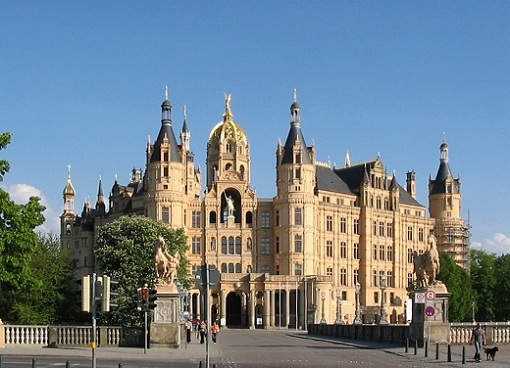 The Soviet zone state of Mecklenburg-Vorpommern, or Mecklenburg and Western Pomerania in English, was formed from the former states of Mecklenburg and Vorpommern following World War II. The state was dissolved by East Germany in 1952 and reinstated after the German reunification of 1990.

The capital of the state is Schwerin. Schwerin Castle, which dates back to the 10th Century, is shown above. For centuries, it was the home of the Dukes of Mecklenburg and Schwerin, and today, it is the home of the state parliament. The largest city in the state, however, is the important Baltic port of Rostock.

Near the end of World War II, many refugees fleeing Berlin came to Mecklenburg-Vorpommern, and its population nearly doubled. Today, with its national parks and wildlife refuges, it is one of the most popular tourist destinations in Germany.

The three major types of definitive postage stamps issued between 1945 and 1946 are shown above. The three stamp designs depict a value numeral, a plowman, and wheat.

Most of the catalogs list twelve stamps in this set, but they are all color and paper varieties of the 6 Pf., 8 Pf., and 12 Pf. denominations shown above. The breakdown of these three stamp types into their catalog listing categories is as follows.

The three stamps shown above were issued in December 1945 to publicize land reform in the Soviet zone. They depict a sower, a horse drawn plow, and a reaper.

The three stamps shown above were issued at the end of December 1945 to raise money for child welfare. They depict an infant, a young girl, and a young boy. 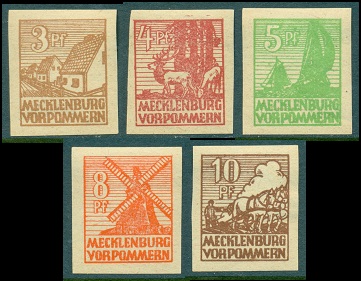 In January 1946, the Soviet zone began issuing a new set of definitive stamps for the state of Mecklenburg-Vorpommern. The first group is shown above. There is also a 4 Pf. denomination in blue, which is not shown in the image.

The stamps in this first group were all issued imperforate. Two types of paper were utilized, the first being a thick white paper, and the second being a thinner toned paper.

These new designs depict a farmhouse, deer, sailboats, a windmill, and a two-horse plow.

As these imperforate stamps are very expensive in used condition, forged cancellations exist. 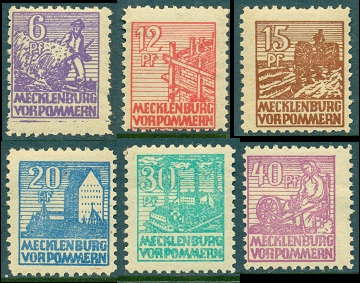 The second group of new definitive designs are shown above. These denominations were all perforated 10 1/2. The 6 Pf. and 12 Pf. were printed on the two paper types noted previously. The higher denominations are all printed on lightly toned paper of medium thickness.

The new designs shown above depict harvesting grain, a bricklayer on scaffolding, a tractor plowing a field, a ship and a warehouse, a factory, and a woman with a spinning wheel.