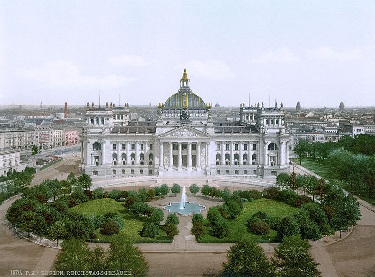 Though the Soviet zone occupation stamps on this page are all inscribed "STADT BERLIN" or "CITY OF BERLIN", they were, in fact, issued for the East German state of "BRANDENBURG", which contained the districts of "BERLIN" and "POTSDAM". The stamps were issued for use throughout all of these areas, and they were also valid for use in the sectors of Berlin occupied by the Western Allied forces.

Berlin was located in the Soviet occupation zone, but due to it's significance as the capital of the former Nazi Germany, the city was jointly occupied by the Allied powers, per the Potsdam Agreement at the end of World War II. It was subdivided into four sectors, one for each Allied power, and it was not considered part of the Soviet zone.

In violation of the Potsdam Agreement, the Soviet military government blockaded the city in 1948, and in 1949, they made the Eastern sector of Berlin the capital of the new German Democratic Republic. 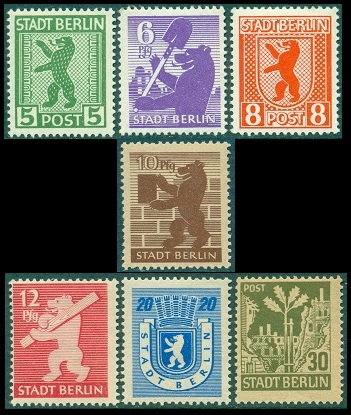 The seven stamps shown in the image above (Mi. #1A-7A, Sc. #11N1-7) were issued in August 1945. They were lithographed on four different types of paper, utilizing various types of gum, and they were perforated 14.

The 5 (Pf.) through the 20 (Pf.) denominations depict the "Berlin Bear" either on a coat of arms or in activities symbolic of the reconstruction efforts. The 30 (Pf.) denomination depicts the ruins of the "Belle-Alliance-Platz" with a newly planted tree growing in the foreground.

Aside from the paper and gum varieties, there are many printing varieties and plate faults on these issues. Consult the Michel Deutschland Spezial Katalog Volume II for details.

In 1946, the Stadt Berlin stamps were replaced by those of the Allied Occupation General Issues of 1946-1948. After the currency reform of 1948, overprinted stamps of the Soviet occupation zone general issue were used in Berlin, Brandenburg, and Potsdam. 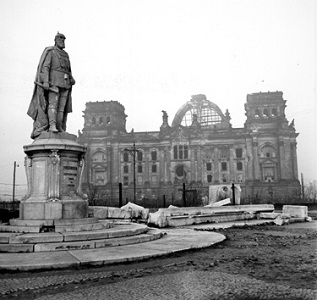