During the Summer of 1945, the Soviet Zone of occupation took control of West Saxony.

Western Saxony was conquered by American troops, under the command of General Patton, in April 1945, and Eastern Saxony, at the same time, was occupied by Soviet troops. The agreement on post-war occupation zones, during the Potsdam Conference, provided that the entire state of Saxony would come under Soviet control. As such, West Saxony was transferred to the Soviets, by the American occupation forces.

Though all of the stamps of West Saxony, under Soviet occupation, are inscribed "Deutsche Post", they were issued for use exclusively in West Saxony.

On August 3, 1945, the 6 Pf., 8 Pf., and 12 Pf. denomination stamps from the Third Reich Hitler definitive postage stamp series were utilized for emergency postal purposes. The stamps had a circular colored overprint with a clear-striped numeral of value in the middle, which served to obliterate the portrait of Adolph Hitler. At the bottom of each stamp, wavy lines were added to obliterate the wording "Deutsches Reich". The 12 Pf. stamp is shown in the image above.

Six thousand of the 6 Pf. and 8 Pf., and eleven thousand of the 12 Pf. stamps were produced (Mi. #AI-AIII). In the Michel catalog, they are valued at about 20 Euros each, for lightly hinged mint stamps. Postally used examples are very rare.

The 5 Pf., 10 Pf., 16 Pf., and 20 Pf. denomination stamps from the Hitler definitive series were also prepared in this way, but they were not officially issued. They are available on the philatelic market, but they are hundreds of Euros each.

On September 28, 1945, the four stamps shown in the image above (Mi. #116-19, Sc. #14N3a-5a, #14N7a) were issued for use in West Saxony, in the Soviet Zone. They were imperforate and printed on paper with a wavy lines watermark. The watermarks come either upright or sideways, with the sideways watermarks being the scarcer of the two.

Some postmasters did not want to deal with cutting apart imperforate stamps, so they had their sheets privately perforated. The gauges of these privately produced separation attempts, with post office names in parenthesis, are perforated 11 1/2 (Mügeln), 11 1/4 x 11 1/2 (Roßwein), perforated 11 1/2 x rouletted 16 (Roßwein), rouletted 9 1/2 (Holzhausen), 10 1/4 (Gaschwitz), 10 (Roßwein), and 16 (Roßwein). Most of them are very scarce. For details and prices, see the Michel Deutschland-Spezial-Katalog.

The two stamps shown above (Mi. #124-25, Sc. #14N13-14) were issued on October 18, 1945, to publicize the Leipzig Sample Fair. They were printed on the same paper as the previous issue, with the two varieties of the wavy lines watermark. The sideways watermark is actually the cheaper of the two.

The new stamps were printed on both a thick grayish-white paper and on a thin white paper. The two papers contained both the upright and sideways wavy lines watermark, as used on previous issues.

The stamps were perforated 13 x 12 1/2, and all of them were printed on white paper, with the sideways wavy lines watermark.

The six pictorial definitive stamps shown above (Mi. #150-55, Sc. #14N15-20) were issued between February and March of 1946. The designs feature the coat of arms of Leipzig, St. Nicholas Church, and the Leipzig City Hall.

The earlier printings of these stamps were on white paper, with either the upright or sideways wavy lines watermark.

The later printings come on unwatermarked grayish and yellowish papers. The printings on yellowish paper are the scarcest (Mi. #150y-55y, Sc. #14N15a-20a). See the Michel Deutschland-Spezial-Katalog for details and pricing. 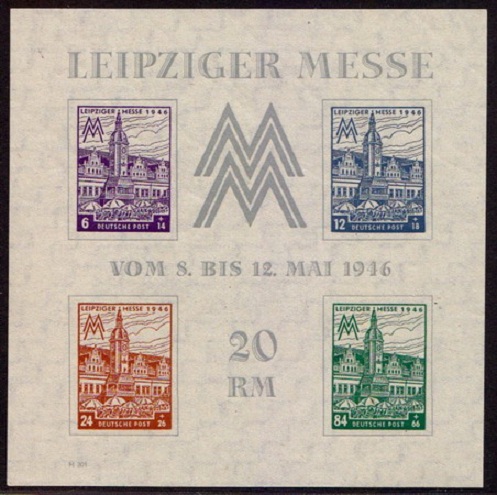 During May 1946, the stamps and souvenir sheet shown above were issued to publicize the "Leipzig Spring Fair". They all feature a view of the Marketplace and the Old City Hall.

The catalog attributes, for stamps that are imperforate and printed on white paper with the wavy lines watermark, are (Mi. #162BX-65BX, Sc. #15NB13a-16a).


The postal issues for West Saxony were replaced by those of the "unified" Soviet Zone.