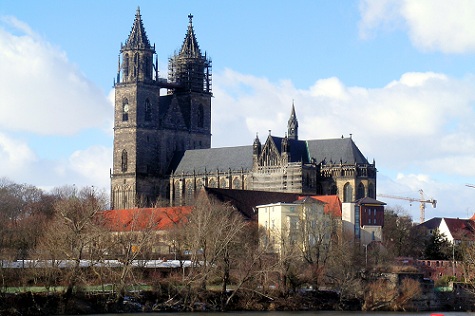 The Province of Saxony was created within the Soviet zone in 1945 by merging Merseburg, Magdeburg, and the state of Anhalt to form a single province. The new province had three administrative districts, with those being Magdeburg, Merseburg, and Dessau.

In 1947, this province was renamed to Saxony-Anhalt, and in 1949, it became a state within the new German Democratic Republic. 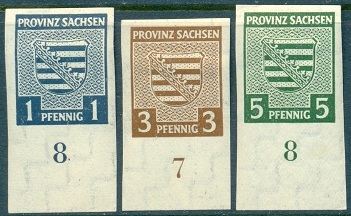 These seven new definitive postage stamps for Province Saxony shown above (Mi. #66-72, Sc. #13N1a-7a) were issued between October and December 1945.

These new stamps featured the arms of Province Saxony and they were printed on paper with a zigzag lines watermark. There are two types of the watermark.

As was the case in East Saxony, some postmasters had their new stocks of imperforate stamp sheets privately perforated or rouletted, to facilitate their separation at post offices. The private perforation gauge was usually about 11 1/2. This resulted in many varieties of these stamps, most of which are very scarce. Please consult the Michel Deutschland-Spezial-Katalog for detailed listings of them. 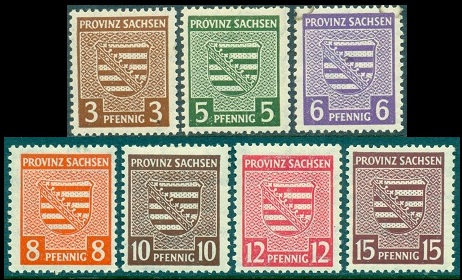 Beginning in November 1945, the Soviet zone Province Saxony added new denomination stamps to the arms definitive series and began issuing the stamps with perforation gauge 13 x 12 1/2. All of them, except for the 1 Pf. denomination stamp, are shown above (Mi. #73-85, Sc. #13N1-12).

The same zigzag lines watermark varieties exist for these perforated stamps, but, with only one exception, they are all common.

The two stamps shown above (Mi. #85-86, Sc. #13N13-14) were issued on December 17, 1945 to publicize Land Reform in Province Saxony. The stamps feature a farmer using a horse-drawn plow. These stamps were all issued imperforate and on unwatermarked paper.

As was the case with the imperforate definitive stamps, some postmasters had sheets of these privately perforated and rouletted, as well. 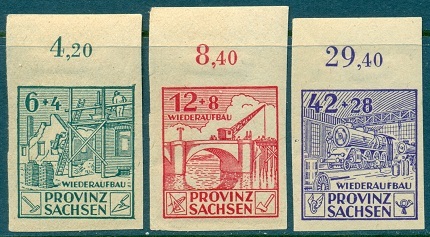