They were national heroes in socialist East Germany, and they would appear on many future commemorative stamp issues of the soon-to-be German Democratic Republic.

Karl Liebknecht was born in Leipzig in 1871. Rosa Luxemburg was born in Russia in 1871, of Polish Jewish descent, and she later became a naturalized German citizen. Both of them were socialist political activists and, together with Leo Jogiches and Clara Zetkin, they were instrumental in the founding of the Spartacist League and the German Communist Party (KPD).

They participated in the Spartacist Uprising of 1919, aimed at establishing a socialist republic in post World War I Germany. The uprising was crushed by forces loyal to the new Weimar Republic, and they were both killed on January 15, 1919. They both became martyrs for the Marxist movement.

The stamp was overprinted and re-issued on May 29, the opening day of the Congress. The overprinted stamp is shown above at the right (Mi. #233, Sc. #10N47).

The designs depict a dove of peace with a laurel branch. 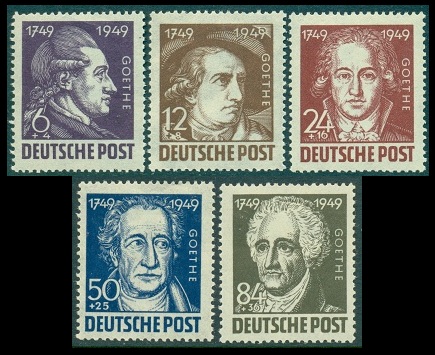 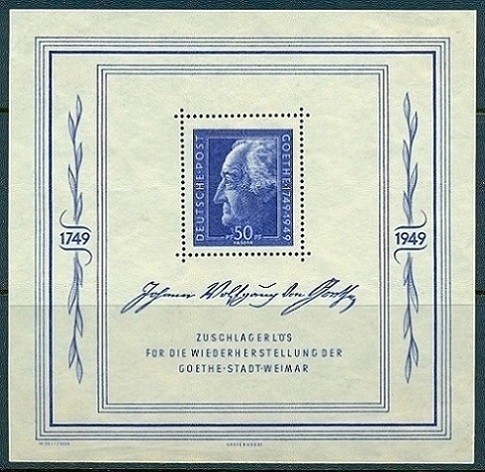 The five stamps shown above (Mi. #234-38, Sc. #10NB6-10) were issued in the Soviet zone on July 20, 1949 to commemorate the 200th Anniversary of the Birth of Johann Wolfgang von Goethe. The designs depict various contemporary portraits of Goethe.


In October 1949, the occupation postage stamp issues of the Soviet Zone were replaced by those of the new German Democratic Republic.