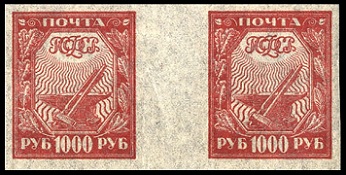 The first postage stamps of Soviet Russia were issued in November 1918, celebrating the first anniversary of the establishment of the Russian Soviet Federated Socialist Republic.   The period from 1918 to 1922 was a tough time for the fledgling socialist state.  First, there was the ongoing Russian Civil War, that would not actually end until the formation of the USSR in 1922.  Secondly, the RSFSR was not immune to the economic disaster that was beginning to sweep across Europe, and that was the period of hyperinflation, as can graphically be seen in their definitive postage stamp issues.

A lot of errors occurred during the production of these stamps, such as double impressions, inverted surcharges, double surcharges, missing surcharges, and varying paper types.  They are all relatively common.  Please refer to the major catalogs for details.

The Bolshevik majority of the Russian Socialist Democratic Party (Communist Party), under the leadership of Vladimir Lenin and Leon  Trotsky, took control of the Provisional Government of the Republic of Russia.  On November 9, 1917, the Russian Soviet Federated Socialist Republic (RSFSR), also known as Soviet Russia, the world's first socialist state, became a sovereign nation.  This Russian state was the same as today's Russian Federation, an immense nation that stretches from Eastern Europe to the Pacific Ocean. 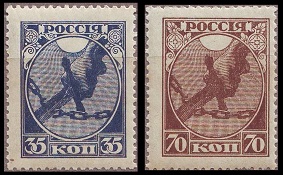 The two commemorative Soviet Russia stamps shown above were issued on November 7, 1918 to celebrate the 1st Anniversary of the October Revolution.

The common design features an allegorical representation of "Severing the Chain of Bondage". 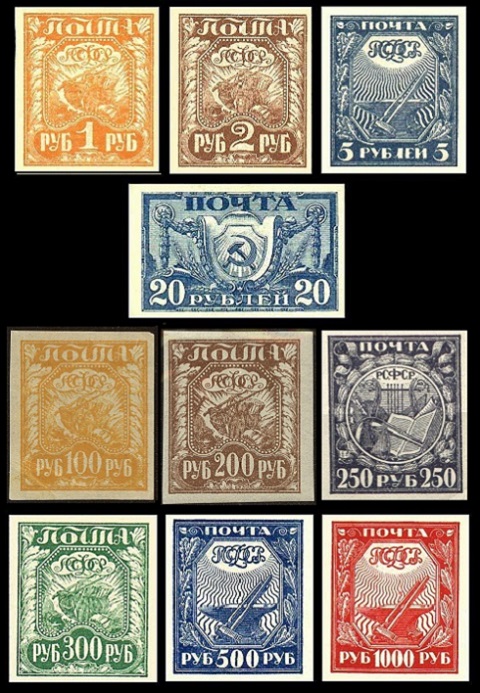 The ten definitive Soviet Russia stamps shown above were issued in August 1921.  The stamps are lithographed on unwatermarked paper of various types, and they are imperforate.  These were the first stamps that were inscribed RSFSR in Cyrillic letters.

The catalog attributes, for stamps printed on regular wove paper, are as follows:

The catalog attributes, for stamps printed on pelure paper, are as follows:

The catalog attributes, for stamps printed on chalky paper, are as follows:

The catalog attributes, for stamps printed on thick paper, are as follows:

The forty Ruble denomination definitive Soviet Russia stamp shown above was issued in August 1921.  The stamp is engraved on paper with the lozenges watermark, and it is imperforate.

The design features an allegorical representation of "New Russia Triumphant".

This stamp comes in two types, with the first type being about 1 mm. narrower than the second type.

The three commemorative Soviet Russia stamps shown above were issued during 1921 to celebrate the 4th Anniversary of the October Revolution.

The central design features an oval portal with a star shining at the top and the Cyrillic letters for RSFSR in the middle.

A 200 Ruble denomination, in brown, was printed, but it was never officially issued.  An example is shown above.  They are available in the philatelic marketplace, and they are relatively inexpensive. 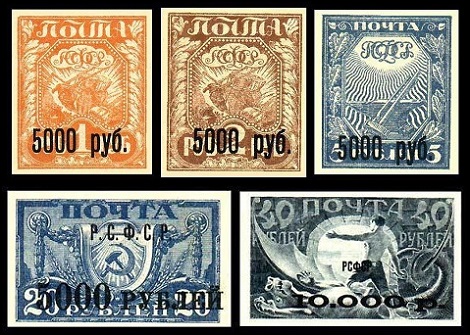 By February 1922, the economic hyperinflation in the RSFSR was starting to become very serious.  The situation required that earlier definitive Soviet Russia stamp issues be re-valued.  They are all shown above. 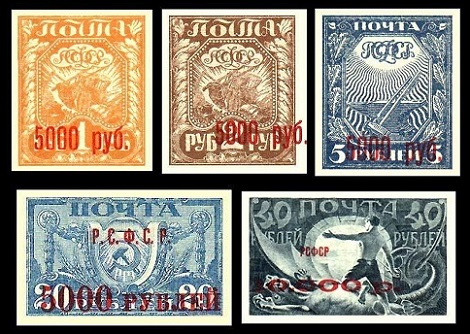 The same group of definitive Soviet Russia stamps was also surcharged in red, as shown above. 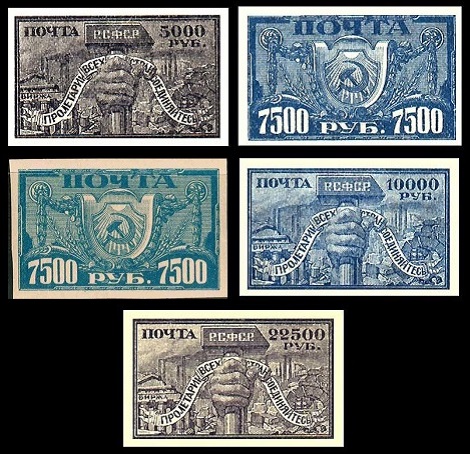 The five very high denomination definitive Soviet Russia stamps shown above were also issued during the hyperinflation of 1922.

The catalog attributes are as follows 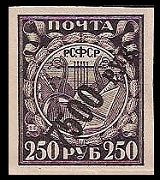 Fortunately, right after the issue of this stamp, the Russian Ruble was re-valued, bringing the hyperinflation to an end.  Subsequent issues reverted to  much smaller denominations. 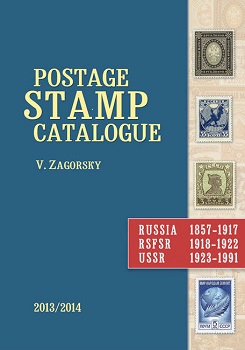