Schleswig-Holstein comprises the southern part of the Jutland peninsula, where the nation of Denmark is located. The ethnic makeup, in various areas of these territories is both Danish and German. Schleswig and Holstein were two former duchies, long disputed by both Germany and Denmark, and a number of wars have been fought over the territories. The major cities are the ports of Kiel and Lübeck. 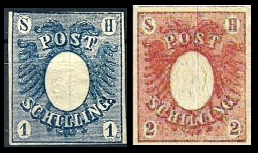 The first stamps for Holstein, shown above (Mi. #1-2, Sc. #1-2), were issued in 1850. The stamps were typographed on white paper with silk security threads, and they featured an embossed coat of arms in the middle.

From 1848 to 1851, the First War of Schleswig was fought between Denmark and Prussia, following a rebellion of ethnic Germans that wanted unification with Prussia. The war ended with a Danish victory, and Denmark gained control of the territory. Between 1851 and 1863, Danish postage stamps were used in the territory.

In 1863, the Second War of Schleswig was fought between Denmark and Prussia, This time, the Prussians, with the aid of the Austrian Empire, were victorious, and the territory reverted to Prussian control.

The stamp shown in the top row, at the left (Mi. #5I-5II, Sc. #15-16), has small lettering and comes in two types.  These stamps were lithographed and imperforate.

The stamp shown in the top row, at the right (Mi. #6, Sc. #17), has larger lettering. This stamp was lithographed and imperforate.

The stamp shown in the bottom row (Mi. #7, Sc. #18) was issued a few months after the previous two. Though it has the same denomination, it has a new design. All these stamps were typographed and rouletted 8. 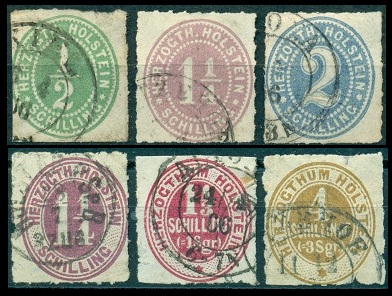 The denominations in the top row were issued in November of 1865, and they are all rouletted 8. 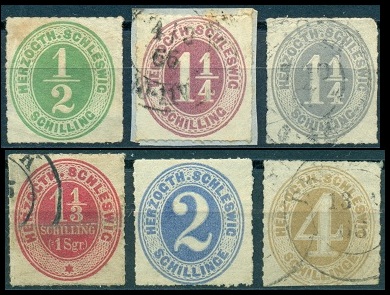 The two denominations in the top row were issued in early 1864, and they are rouletted 11 1/2.

Issues for Schleswig and Holstein 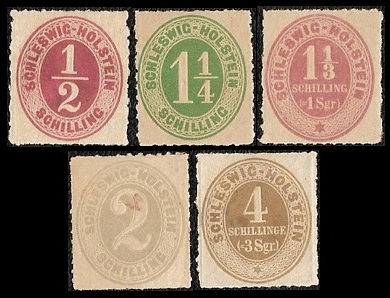