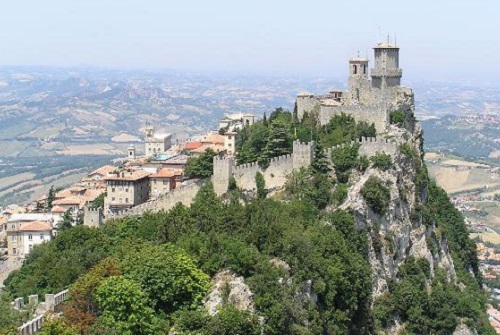 Definitive San Marino stamps first appeared 1877, representing this very special little mountaintop republic in Northern Italy.  San Marino is the oldest continuous sovereign state and constitutional republic in the world, having originally been founded, as a monastic community, over 1,700 years ago.

Marinus of Arba (c. 275-366) was a stonemason from the Roman Imperial province of Dalmatia (present day Croatia).  To escape the Roman persecution of the Christians there, he traveled to Italy, where he became a deacon and was ordained by Gaudentius (d. 360), the Bishop of Rimini.  Later on, Marinus was wrongly accused of a crime, and he fled to Mount Titano, where on September 3, 301, he established a chapel and a monastery.  He spent his later years ministering to Christians that had been sentenced by the Romans to working in the quarries, as punishment for their faith.  Following his eventual canonization, the little monastic community and town that grew up along the slopes of Mt. Titano was named in honor of Saint Marinus ..... "San Marino".  He is the patron saint of bachelors, deacons, falsely accused people, and of the Republic of San Marino.

The current constitution of the Republic of San Marino was enacted on October 8, 1600.  The executive power is the Captains Regent.  The legislative power is the Grand and General Council.  The judicial powers are separate from the executive and legislative powers.  These concepts are based on the Ancient Roman Republic, where the Captains Regent is equivalent to the Roman Consuls, and the Grand and General Council is equivalent to the Roman Senate. 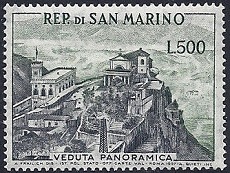 Today, the little republic of 24 square miles, and an estimated population of 32,000, is one of the stablest nations in Europe.  San Marino has one of the lowest unemployment rates of any country in Europe, it has NO national debt, and the economy maintains a consistent budget surplus.  Not surprisingly, one of San Marino's largest commercial exports is postage stamps!

Paintings of Raphael
Postage Stamps of 1983

Links to historical articles and reviews of the postage stamps of San Marino will eventually appear at the top of the third column of this page.