For the predominately German people of the Saar Plebiscite Territory, 1934 was a year of great excitement. It was also a banner year for postage stamp re-issues!

After almost 16 years of French occupation, the residents of the Saargebiet were FINALLY going be allowed to vote in a referendum to determine which nation, either Germany or France, that their state would join. 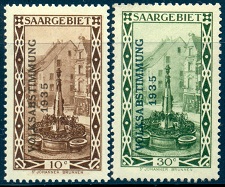 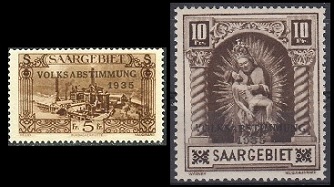 These overprinted stamps were issued to promote the referendum to be held in January 1935. 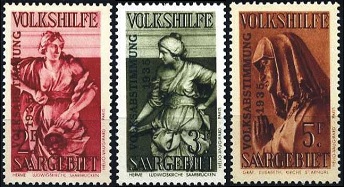 
The plebiscite was held on January 13, 1935. Over 98% of the electorate participated in the referendum, and the approximate results were as follows:

On January 17, 1935, the vote was approved by the League of Nations, and on March 1, 1935, the Saar Plebiscite Territory became a state of the German Third Reich.

The stamps have an allegorical depiction of "Saar" (a child) returning to the arms of "Mother Germany".


Return to Saar from
Saar Plebiscite Territory - Plebiscite Issues of 1934