These new airmail stamps depicted a Focke-Wulf A-17 monoplane flying over Saarbrücken airport, with the Church of St. Arnual shown in the distance.

The Focke-Wulf A-17 was an airliner built in Germany in the late 1920's.  The aircraft provided fully enclosed seating for up to eight passengers and had a separate, fully enclosed flight deck for the two pilots. Most of them flew with Deutsche Lufthansa, serving until around 1936.

According to a newspaper article from February 24, 1933, the explosion, two weeks before, was caused by a workman trying to repair a gas-filled pipe with a flame-cutter.  Approximately 200 people were killed in the explosion, while another 2,000 were injured. 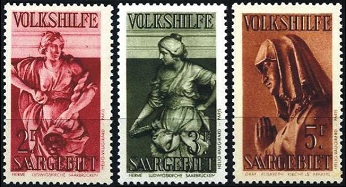 These seven designs feature themes based on works of art in various Saarbrücken churches, as follows: "Love", "Anxiety", "Peace", "Solace", "Welfare", and "Truth".  The 5 Fr. denomination shows praying figure from the Tomb of Duchess Elizabeth of Lorraine.