Between 1926 and 1928, the Saar Plebiscite Territory, "Saargebiet" or "Saar Occupation" in German, issued their first surcharged charity stamps and a brand new series of definitive postage stamps.

The four designs feature a red cross dog leading a blind man, a nurse with an invalid, children drinking at a spring, and a maternity nurse with a child. 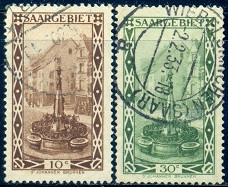 At the end of 1926, the Saar Plebiscite Territory began issuing a brand new series of pictorial definitive postage stamps. The 1926-1927 issues are shown in the first three images above (Mi. #108-21, Sc. #120 // #135). These new stamps were wider than the previous definitive postage stamps, and one could say the stamps were beginning to get that French-colonial-postage-stamp "look" to them. These new stamps were printed in photogravure, and they were all perforated 13 1/2.

The designs, which are repeated throughout the set, feature (in the order of their appearance): the Market Fountain in St. Johann, a view of the Saar Valley, a scene from the Saarlouis fortifications, Colliery Shafthead, Tholey Abbey, and the Burbach Steelworks.


In September 1928, two airmail stamps were issued. They are shown in the last scan above (Mi. #126-27, Sc. #C1-2). Though intended for airmail service, they were also used as regular postage stamps. The design features a biplane flying over Saarbrücken. 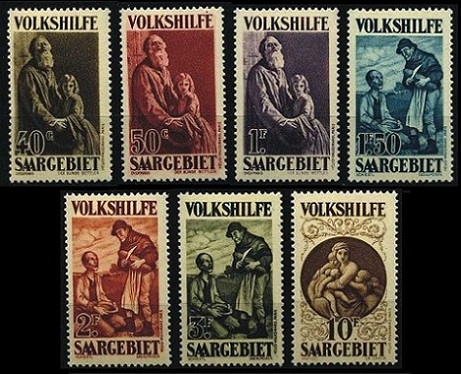 
The charity issues of Saargebiet are very popular with thematic collectors of Art / Paintings on Stamps, which has resulted in these sets becoming quite expensive. The 1928 set, containing the painting by Raphael, is the most expensive. Subsequent issues, though not cheap, are more affordable.