The Saar Plebiscite Territory, "Saargebiet" or "Saar Occupation" in German, began issuing its own pictorial definitive postage stamps during 1921.

At first the new postage stamps were denominated in German Pfennig and Marks. During 1921, the French occupation government changed the postage stamp denominations to Centimes and Francs, and they would remain that way until 1935. 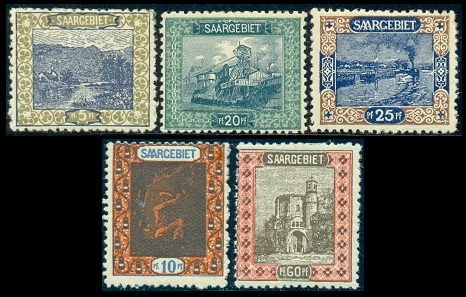 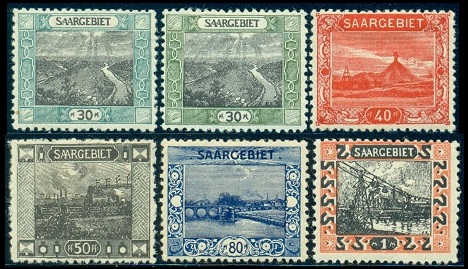 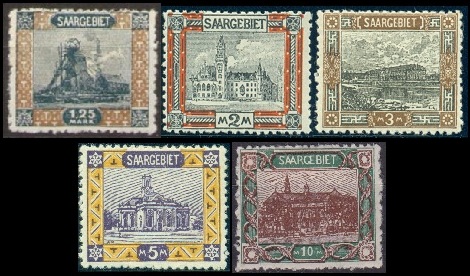 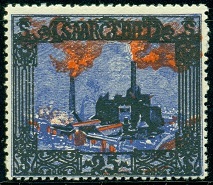 These stamps tend to have rough to very rough perforations. The Michel Catalog states that examples with clean-cut perforations all around are worth about double the prices of the roughly perforated examples.

The stamps depict views of Saar, as follows:

Tête-bêche pairs of the 5 Pf., 20 Pf. - 40 Pf., and 80 Pf. denominations exist. These are from unbroken sheets that were not divided into panes. The horizontal tête-bêche pairs are much higher priced than the vertical pairs. There are also imperforates of all the stamps in this set, though they were not regularly issued. 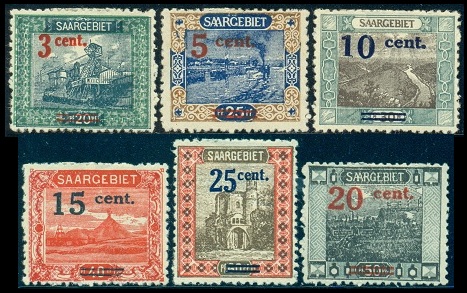 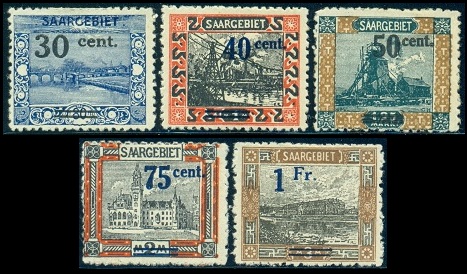 In early 1921, the German Mark was replaced by the French Franc as the currency of the Saar Plebiscite / Occupation Territory.

Between April and July, fourteen denominations from the previous set were re-valued with new values in Centimes and Franks (Franken). They are all shown in the images above (Mi. #70-83, Sc. #85-98). They have the same printing and perforation characteristics as the original German Pfennig / Mark denomination issues.

There are many collectible plate and overprint varieties on these stamps. For details, refer to the Michel Deutschland Spezial Katalog volume I. As with the previous issue, most of these surcharged stamps are also known imperforate.


Return to Saar from
Saar Plebiscite Territory - Issues of 1921