The Saar Plebiscite Territory (Sarre in French), or Saar Occupation Territory (Saargebiet in German), was mandated to France following the end of World War I. The League of Nations mandate carried a provision that a plebiscite would be held within 15 years, to determine the national affiliation of the former German Imperial territory.

The first postage stamps for the Plebiscite Territory were issued in 1920. 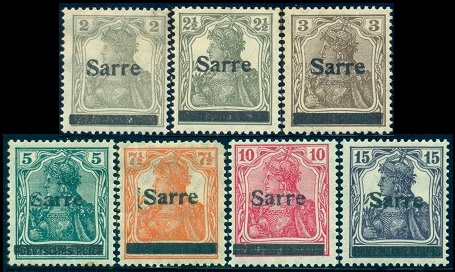 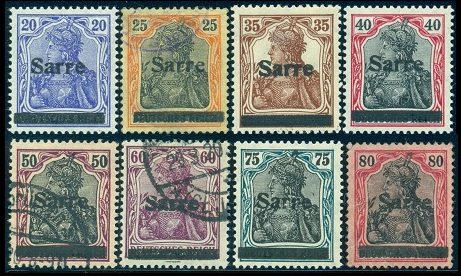 Between January and March of 1920, the contemporary Germania and Representative Subject stamps of Germany, issued between 1906 and 1919, were overprinted Sarre, with a bar at the bottom obliterating the inscription "DEUTSCHES REICH". All of them are shown in the image above, with the exception of the 30 Pf. orange and black (Mi. #1-17, Sc. #1-17).

There are three types of the overprint. In the images above, the types are mixed, but they can easily be picked out.  The type II overprint is the scarcest of the three. The overprint types are as follows:

Most of the stamps in this group exist with inverted overprints, double overprints, and in pairs with one overprint missing. These varieties are moderately to very expensive. There are also many printing errors in the overprint letters and bar. For details, refer to the Michel Deutschland-Spezial Katalog volume I.

The Un-issued 3 Mark Denomination with the "Sarre" Overprint
Generally Unobtainable  (Mi. #A17) 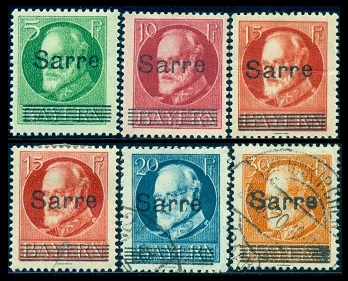 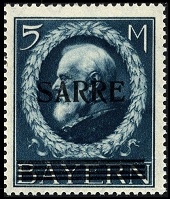 At the beginning of March 1920, the locally available Ludwig III wartime printing definitives of Bavaria were also utilized with a similar Sarre overprint. Instead of an obliterating bar at the bottom, there were thin horizontal lines covering the inscription "BAYERN". These overprints on Bavarian stamps are much scarcer than those that were applied to the contemporary German stamps. Some of them are shown in the images above.  The "issued" stamps have the following catalog attributes .... (Mi. 18-31, Sc. #21, #23-39).

The overprint on the 5 Mk. and 10 Mk. denominations is SARRE, whereas the other stamps are overprinted Sarre.

There are also double overprints and many overprint errors on this issue that are noted in the Michel specialized catalog. 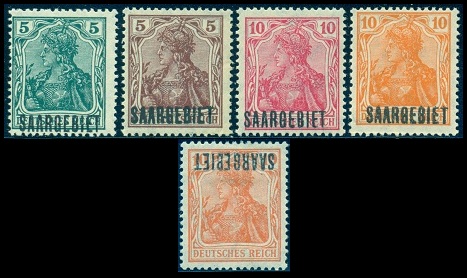 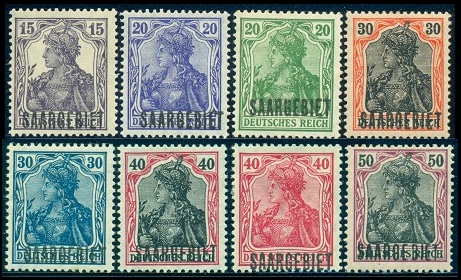 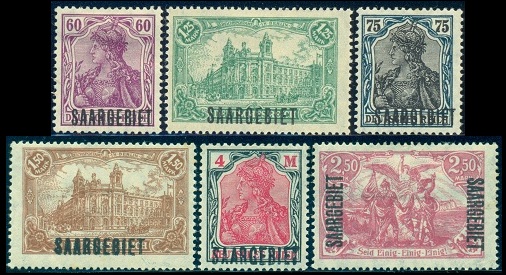 On April 10, 1920, the Germania and Representative Subject stamps of Germany, issued between 1906 and 1920, were overprinted with a new overprint. This Saar Plebiscite Territory issue yielded new German stamp denominations, as well as a number of color varieties. All of them are shown in the three images above (Mi. #32-49, Sc. #41-58).

This new series for the Saar Plebiscite Territory was overprinted SAARGEBIET, the German language name meaning "Saar Occupation". The overprint was positioned on each stamp to cover up the inscription "DEUTSCHES REICH", thus the 2.50 Mk. denomination stamp required two overprints.

Many of the denominations exist with double overprints and inverted overprints, and there are many printing varieties that are described in the Michel specialized catalog. The errors and varieties on this issue are relatively common, and they are very affordable. A 10 Pf. orange, with an inverted overprint, is shown in the images above (Mi. #45K, Sc. #44a).