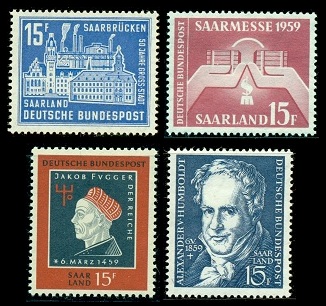 For Saarland - Bundesland of the Federal Republic of Germany, 1959 was a very brief year for postage stamp issues.

The 15 Fr. stamp shown above, at the top left (Mi. #446, Sc. #320), was issued on April 1 to celebrate the 50th Anniversary of Greater Saarbrücken. The stamp depicts the City Hall of St. Johann of Saarbrucken, completed in 1900,  and the Burbach steel mill and power plant.


The stamp above, at the top right (Mi. #447, Sc. #321), was issued April 1 to publicize the 1959 International Saar Fair held in Saarbrücken. The stamp depicts stylized hands holding merchandise, with the fair emblem behind.

Jacob Fugger, a German banker, expanded his family's business to become one of the richest men in World history. Leading a consortium of German and Italian businessmen, in 1519, Fugger loaned Charles V 850,000 Florins (almost 100,000 oz. of gold), to procure his election as the Holy Roman Emperor over France's Francis I. At Fugger's death in 1525, Fugger had amassed assets totaling over two million Guilders!

Friedrich Wilhelm Heinrich Alexander von Humboldt was a Prussian geographer, naturalist and explorer, and the younger brother of the Prussian minister, philosopher and linguist Wilhelm von Humboldt (1767–1835). Humboldt's quantitative work on botanical geography laid the foundation for the field of biogeography.


On July 7, 1959, the Franc was replaced by the West German Deutsche Mark, so there was no longer any need for separate postage stamp issues, duplicating those of West Germany. Since then, postage stamps of the Federal Republic of Germany have been used in the Saar.


Return to Saar from
Saarland - Bundesland - Issues of 1959