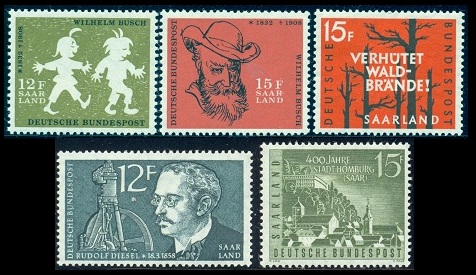 As with the other Bundesland issues of 1958, these are identical to the same issues of the Federal Republic of Germany, with the only difference being the addition of "SAAR / LAND" to the legend and the denomination being in French Francs.

The two stamps feature "Max and Moritz" and a portrait drawing of Wilhelm Busch.


The postage stamp shown at the top right (Mi. #431, Sc. #311) was issued on March 5 to publicize Forest Fire Prevention. The stamp depicts a burned forest, with the slogan "Prevent Forest Fires" in German.


The stamp shown at the bottom right (Mi. #436, Sc. #314) was issued June 14 to commemorate the 400th Anniversary of the Town of Homburg in the Saarland. The stamp depicts the old town and the 12th Century castle of Homburg.

The illustrations feature "The Fox who Stole the Goose" and "A Hunter from the Palatinate".

The stamp above at the right (Mi. #435, Sc. #313) was issued April 10 to publicize the 1958 International Saar Fair held in Saarbrücken. The stamp depicts a silhouette of the Saarbrücken City Hall with the fair emblem above. 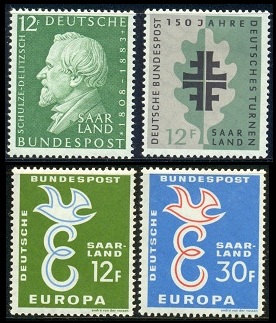 The stamp shown above, at the top left (Mi. #438, Sc. #316), was issued on August 29 to commemorate the 150th Anniversary of the Birth of Herman Schulze-Delitzsch (1808-1883). An economist and a member of the Reichstag, Schulze-Delitzsch is known as a founder of German trade cooperatives (credit unions) to benefit the smaller tradesmen and artisans.


The stamp shown at the top right (Mi. #437, Sc. #315) was issued July 21 to publicize 150 years of German Gymnastics and the 1958 Gymnastic Festival. The stamp depicts the emblem of the Turners, an association to promote health and physical education.


The two stamps above at the bottom (Mi. #439-40, Sc. #317-18) were issued on September 13 for the annual celebration of the European Union (EUROPA). The design symbolizes the European Postal Union at the service of European Integration. 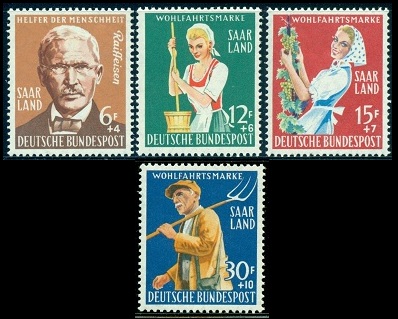 The set of four Saarland charity stamps for public welfare shown above (Mi. #441-44, Sc. #B123-26) was issued on October 1. The theme of this annual issue is "agriculture". The surtax went to public charities.

The four stamps depict Friedrich Wilhelm Raiffeisen (1818-1888), a pioneer in rural credit unions, a dairy maid, a girl picking grapes, and a farmer with a pitchfork.


Return to Saar from
Saarland - Bundesland - Issues of 1958