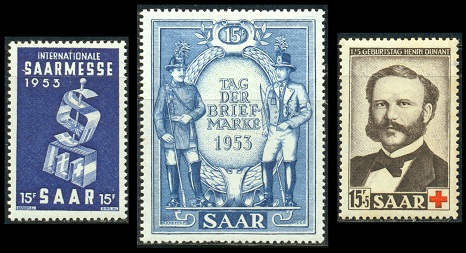 Henri Durant was a Swiss businessman, social activist, and the founder of the International Red Cross in 1863. He was also instrumental in the 1864 Geneva Convention, and in 1901, he was awarded the Nobel Peace Prize. 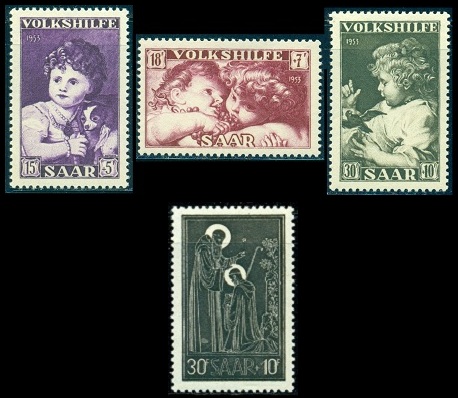 The three stamps feature details from classical paintings that reflect the theme of "children". The designs are as follows: "Clarice Strozzi" by Titian (1488-1576), "Children of Rubens" by Rubens (1577-1640), and "Portrait of Rubens' Son with a Bird" by Rubens.

The design depicts St. Benedict of Nursia and St. Maurus of the Benedictine Order, which is part of a fresco in the Monastery of Monte Cassino in Italy.

The Saarland postage stamp shown above, at the left (Mi. #348, Sc. #248), was issued on April 10, 1954 to publicize the 1954 International Saar Fair held in Saarbrücken. The stamp design features a fountain and the fair buildings.


The 1954 Stamp Day commemorative stamp shown above center (Mi. #349, Sc. #249) was issued on May 9. The design features a postal coach and a postal bus in front of the Saarbrücken City Hall circa 1920. These stamps were also issued in miniature sheets of 10.

The beautiful set of Saarland stamps shown above (Mi. #351-53, Sc. #250-52) was issued August 14, 1954, to publicize Marian Year and the Centenary of the Promulgation of the Dogma of the Immaculate Conception. 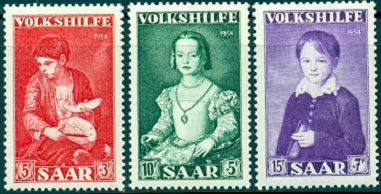