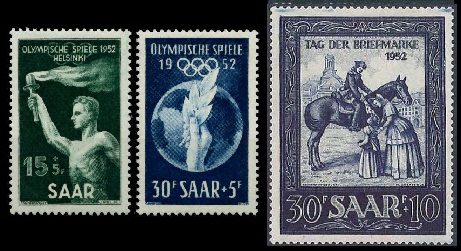 In 1952, Saarland would participate in the XV Summer Olympic Games in Helsinki, Finland as an independent nation for the first and only time. Their Olympic committee sent 36 athletes to Helsinki, who took part in 32 events and 9 sports. Unfortunately, they did not medal in any of the events.

To mark this historic occasion of immense national pride, two surcharged commemorative postage stamps shown above, at the left (Mi. #314-15, Sc. #B89-90), were issued on March 29, 1952. The designs feature a torch bearer and a globe with an olive branch.


The 1952 Stamp Day commemorative stamp shown above, at the right (Mi. #316, Sc. #B91), was issued on March 30, coinciding with the International Thematic Stamp Collecting Exhibition (IMOSA), held in Saarbrücken. The design features a mounted mail carrier delivering mail to a woman and child. These stamps were also issued in miniature sheets of 10. 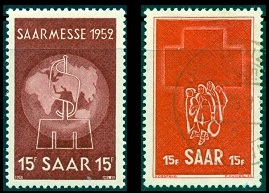 The postage stamp shown above left (Mi. #317, Sc. #231) was issued on April 26 to publicize the 1952 International Saar Fair held in Saarbrücken. The stamp shows a World globe, along with the emblem of the 1952 fair.


The postage stamp shown above right (Mi. #318, Sc. #230) was issued on May 2 to publicize Red Cross Week. The design features refugees, with a large cross above. 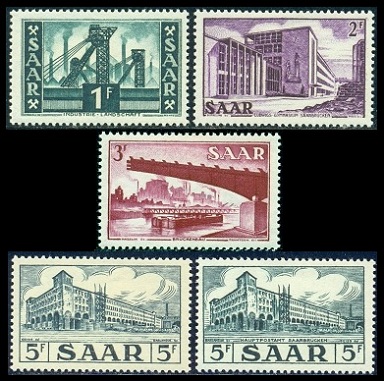 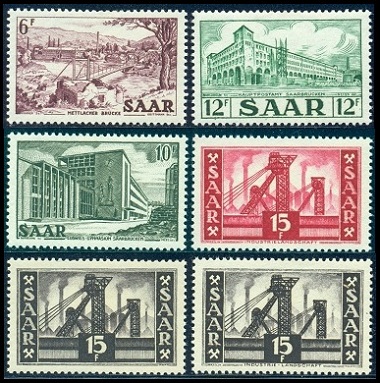 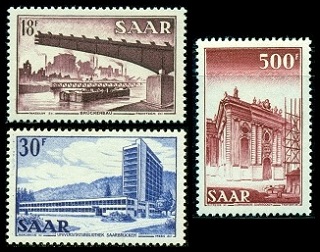 Beginning in 1952 and continuing through 1955, Saarland began issuing a new set of beautifully engraved definitive postage stamps. The new definitive stamps (Mi. #319-37, Sc. #232-45) feature the theme of "scenes from Saarland".

The designs and types of the new definitive issues are as follows: 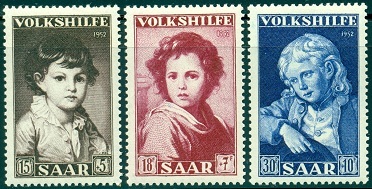