Saarland is the German name for the Saar Protectorate, established by French occupation forces at the end of World War II, and for the present-day state of the Republic of Germany.

In July 1945, US military forces turned Saar over to the French, and they established an occupational administration there. In 1946, the French military segregated Saar from the allied occupation zones and established the separate Saar Protectorate. France would continue their administration of and economic influence over the protectorate through the end of 1956, when it would become a state of the Federal Republic of Germany. 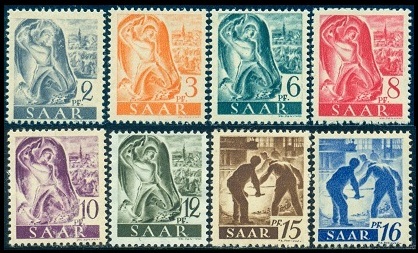 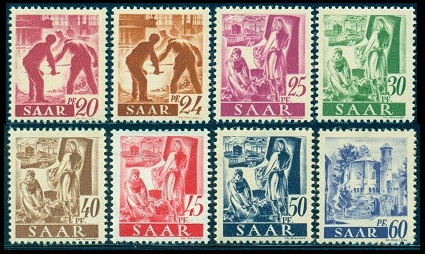 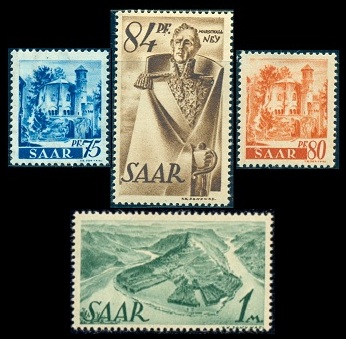 Between January and March of 1947, the French military administration of Saarland issued a set of definitive postage stamps, in the same style and fabric of the issues of the other German states in the French occupation zone. They are all shown above (Mi. #206-25, Sc. #155-74).

This new definitive set featured six designs, which were: a miner, steel workers, harvesting sugar beets, Mettlach Abbey, Marshal Ney, and a view of the Saar River near Mettlach. The first four designs were repeated in varying denominations and colors within the set, as indicated in the images above.

Beginning in November 1947, the French administration started re-valuing the current postage stamps in French currency. Several examples from Printing II are shown above.

There were two different printings of these re-valued stamps.

All of these stamps come in a multitude of paper, printing, and plate varieties. For detailed information on the printings, surcharges, and varieties of these issues, refer to the Saarland section in the Michel Deutschland-Spezial-Katalog volume II.