The first Imperial Russian stamps, issued for the purpose of raising money for charitable purposes, appeared in 1905.  These are regular definitive and commemorative postage stamps, but they have a "value added tax" or "surtax" on them, designed to raise money for national organizations, public events, and public charities.  For this website category, these stamps will be referred to as "Charity Stamps".

The four pictorial Russian stamps shown above were issued in 1905.  The stamps are typographed on unwatermarked paper, and they are perforated 11 1/2 to 13 1/2.

Each stamp sold for three Kopecks over the face value, with the surtax being donated to a fund for the orphans of soldiers killed in the Russo-Japanese War.

The four central designs are as follows: 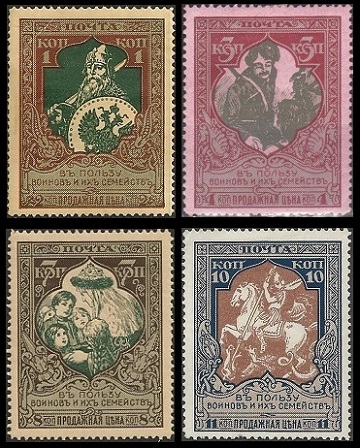 Each stamp sold for one Kopeck over the face value, with the surtax being donated to various charities during World War I.

The four central designs are as follows:

The catalog attributes, for stamps printed on colored paper, are as follows:

The catalog attributes, for stamps printed on white paper, are as follows: