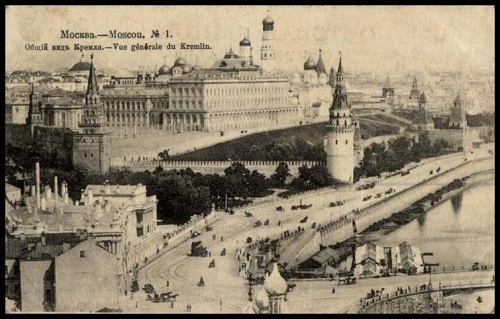 The Kremlin, Moscow, about 1900
From: An Old Postcard

The original name of the Russian Empire and the modern-day Russia was Русь (Rus), an Eastern European area that had been populated primarily by the East Slavs from the 7th Century. The inhabitants of this area referred to it as "Русская Земля" (russkaya zemlya), meaning the "Land of Rus" or the "Russian Land". Modern historians refer to this medieval state as "Kievan Rus".

The current name of the Russian Federation, Россия (Rossiya), is derived from the Greek version of Rus, spelled Ρωσία [ros-ia], which was the name given to "Kievan Rus" during the time of the Byzantine Empire. 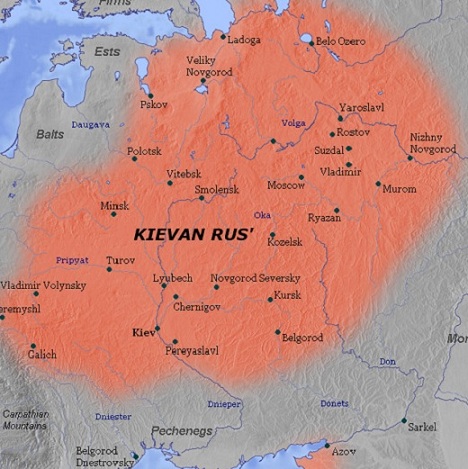 Map of Kievan Rus in the 11th Century 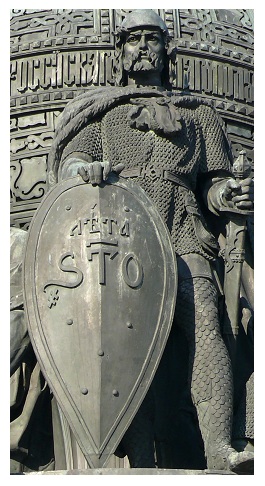 The establishment of the first East Slavic states, in the 9th Century, coincided with the arrival of the Varangians (Vikings) who ventured along the waterways from the eastern Baltic to the Black and Caspian seas. A Varangian, named Rurick, was elected ruler of Novgorod in 862. A statue of Rurick, from a modern Russian monument, is shown in the picture at the right. Rurik's son, Oleg, moved South and conquered Kiev in 882, which is considered the beginning of the state of Kievan Rus.

In the 10th and 11th Centuries, Kievan Rus became one of the largest and most prosperous states in Europe. The reigns of Vladimir the Great (980-1015) and his son, Yaroslav I the Wise (1019-1054), constitute the Golden Age of Kiev, which saw the acceptance of Orthodox Christianity and the creation of the first East Slavic written legal code. By the early 13th Century though, with the in-fighting between members of the Rurikid Dynasty, and the Mongol invasions of 1237-1240, the Kievan Rus disintegrated.

The most powerful successor to Kievan Rus was the Grand Duchy of Moscovy (Moscow). Moscow began to assert its influence in Western Russia in the 14th Century. The united army of Russian principalities defeated the Mongol-Tatars in 1380. Afterward, Grand Duke Ivan III consolidated the whole of Central and Northern Rus under Moscow's dominion, and he was the first to take the title "Grand Duke of all the Russias". After the fall of Constantinople in 1453, Moscow claimed succession to the legacy of the Eastern Roman Empire. Ivan III married Sophia Palaiologna, the niece of the last Byzantine emperor, and he made the Byzantine double-headed eagle, which would eventually become the symbol of the Russian Empire, his coat of arms. 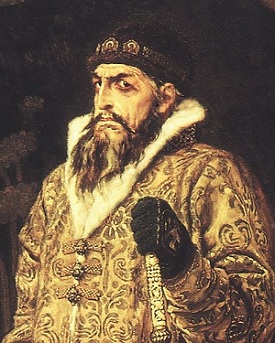 In 1547, in an effort to project the Russians as the Third Roman Empire, Grand Duke Ivan IV (the "Awesome" or "the Terrible" was crowned Ivan I, the first Czar (Caesar) of Russia. A painting of Ivan I is shown at the left. During his long reign, Ivan nearly doubled the already large Russian territory by annexing three Tatar Khanates, Kazan and Astrakhan along the Volga River, and the Sibirean Khanate in South Western Siberia. By the end of the 16th Century, Russia was transformed into a multi-ethnic, transcontinental state.

Russia continued its territorial growth through the 17th Century, which was the age of the Cossacks. These were warriors, organized into military communities, resembling the pirates and pioneers of the New World. In 1648, the peasants of Ukraine joined the Cossacks, and in 1654, the Ukrainian leader placed Ukraine under the protection of the Russian Czar, Aleksey I (1629-1676). The East saw the rapid colonization of the huge territories of Siberia, all the way to the Pacific coast. 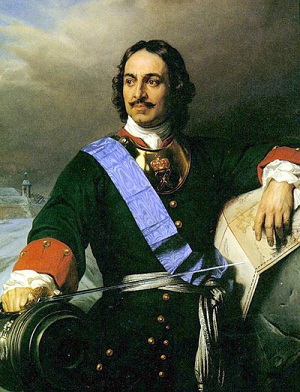 Under Czar Peter I (the Great), shown in the painting at the right, the "Russian Empire" was proclaimed in 1721, and it soon became recognized as a world power. Ruling from 1672 to 1725, Peter defeated Sweden, forcing it to cede West Karelia and Ingria, as well as Estland and Livland, and he succeeded in securing Russia's access to the Baltic Sea and to sea trade. On the Baltic Sea, Peter I founded a new capital called Saint Petersburg. His many reforms brought considerable Western European cultural influences to the new Russian Empire.

Catherine II (the Great), who ruled from 1762-1796, presided over the Age of Russian Enlightenment. She extended Russian political control over the Polish-Lithuanian Commonwealth and eventually incorporated most of its territories into Russia, pushing the Russian frontier Westward into Central Europe. In the South, Russia's borders were extended to the Black Sea, after the defeat of the Crimean Khanate.

In the early 19th Century, under the rule of Czar Alexander I (1801-1825), Russia took Finland from the weakened Kingdom of Sweden and took Bessarabia from the Ottomans. At the same time, the Russians colonized Alaska and even established settlements on the West Coast of North America, as far south as California.

The Russian Empire was instrumental in the defeat of Napoleon Bonaparte, at the end of his quest to conquer all of Europe. Almost 95% of Napoleon's "Grande Armée" perished during the cold Russian winter of 1812. The Russian army drove Napoleon from Russia and pushed him back across Europe, finally entering Paris. Czar Alexander I headed Russia's delegation to the Congress of Vienna that defined the map of post-Napoleonic Europe.

In another major feat, it was a Russian sea expedition in 1820 that discovered the previously unknown continent of Antarctica.

The Kremlin, Moscow, about 1908
From: An Old Postcard

The 19th Century saw the rise of socialist movements in Russia, as well as in the rest of Europe. The last Russian Czar, Nicholas II (1894-1917), was unable to prevent the events of the Russian Revolution of 1905. The uprising was put down, but the government was forced to concede major reforms, including granting freedom of speech and assembly, the legalization of political parties, and the creation of an elected legislative body, the State Duma of the Russian Empire.

In 1914, the Russian Empire entered World War I, due to the Austrian Empire's declaration of war on their ally, Serbia. The Russian army achieved many military successes, however, the existing public distrust of the monarchy was deepened by the rising costs of the war, high casualties, and rumors of corruption and treason. The monarchy and the Russian nobility paid little attention to the needs of the Russian working classes and peasants, and they were about to pay a terrible price for their lack of concern!

The February Revolution of 1917 forced Czar Nicholas II to abdicate, and the Russian Empire ended. He and his entire family were imprisoned and later executed during the Russian Civil War.


Return to Russian Stamps from
Russian Empire - A Brief History