Most of the images used on this page are of certified examples of the stamps that have been offered in the past by major public auction houses.  In some cases, they have been cropped and resized to make them a uniform display size. 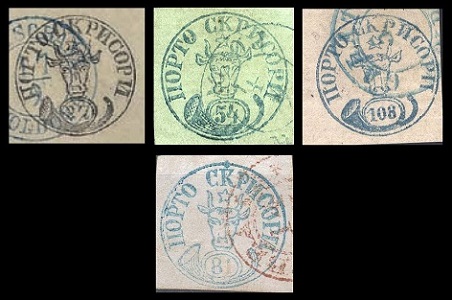 The four Romanian stamps shown above were issued in the Principality of Moldavia between July and October of 1858.  These were the first postage stamps issued by any Southeastern European state.

The design features the Arms of Moldavia, with that being a "auroch or bull head, with a star above".  The denomination is contained within a post horn.  The inscription reads ПОРТО СКРИСОРИ (PORTO SCRISOREI), Romanian Cyrillic for "Postage to be paid by the recipient".  This inscription is actually a mistake.  The inscription should have read FRANCO in Cyrillic letters instead of PORTO in Cyrillic letters, which would have changed the meaning to "Postage to be paid by the sender".  The payment of postage obviously happened when the stamp was affixed to the letter envelope by the sender.  These new stamps were only valid for postal use within the Principality of Moldavia.

The design of these stamps, utilizing an auroch and a star, was also a political statement against the Ottoman Empire, which actually ruled over the principality during this time.

These denominations were hand-stamped from a single die, one at a time, in black or blue ink onto papers of various colors.  They were issued in sheets of 32 stamps, arranged in four rows of eight stamps, which were usually badly aligned.

The census figures for these stamps, as of 1994, are as follows:

The four Romanian stamps shown above are ranked among the World's greatest philatelic rarities.  The combined 2018 Scott Catalog value of these stamps, in used condition, is US $106,000.00.  These stamps are seldom offered for sale in the philatelic market place.  When they are available, they are usually sold through major public auction houses, where the competition for them is tremendous.

These four stamps have been extensively forged.  Any examples offered for sale, that are not properly authenticated or certified, should be assumed to be possible forgeries, unless their status can be proved otherwise. 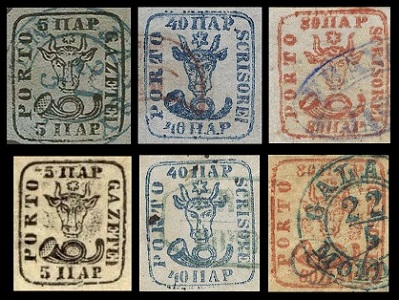 These new designs are somewhat rectangular with rounded corners.  The inscription is spelled in Latin letters, however the denomination name is still spelled in Cyrillic letters.

The three stamps shown above, at the top, were issued in 1858.  They were printed, using the same process as the first issues, on bluish, wove paper.

The three stamps shown above, at the bottom, were issued in 1859.  They were printed on white, wove paper.

The two 5 Pa. denomination stamps shown above were issued as newspaper stamps, being inscribed GAZETEI, instead of SCRISOREI.  Both of these stamps are very rare.

Due to the way the rows on each sheet of 32 stamps were oriented, all of these stamps exist as tête-bêche pairs. 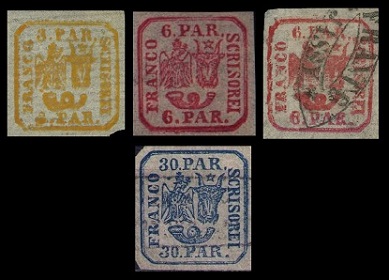 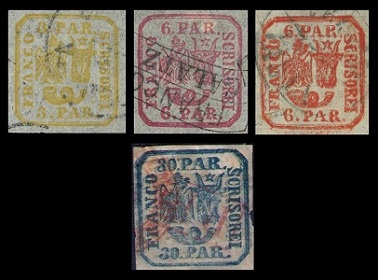 The Romanian stamps shown in the two images above were issued by the United Principalities of Moldavia and Wallachia during 1862.

These new designs are squarish with rounded corners.  They feature the combined coats of arms of the Principalities of Moldavia and Wallachia, with a post horn below.  The inscriptions have been corrected from PORTO SCRISOREI to FRANCO SCRISOREI, and the inscriptions are ALL spelled in Latin letters.

The four stamps shown in the image above, at the top, were issued on white, laid paper.

The four stamps shown in the image above, at the bottom, were issued on white, wove paper.

All of these Romanian stamps were printed with a hand press, one at a time, from single dies.  The impressions were irregularly spaced, and occasionally the impressions even overlapped.  They were printed in sheets of 32 stamps, arranged in four rows of eight stamps.  The 3rd and 4th rows were printed inverted, making the 2nd and 3rd rows tête-bêche, thus all of these stamps exist in tête-bêche pairs.  All of the denominations come in various shades, sometimes occurring within the same sheet of stamps.  The paper used for this issue, as well as subsequent issues, often shows a bluish, grayish, or yellowish tint.

Beginning in 1864, the 3 Pa., 6 Pa., and 30 Pa. designs of 1862 were typographed from plates containing 40 impressions, arranged in five rows of eight impressions.  These new Romanian stamps were all printed on white, wove paper.  Only the 30 Pa. denomination stamp is shown in the image above. 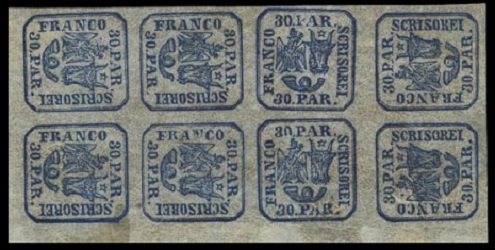 Within the new plates, the 1st and 2nd rows were inverted.  The impressions on the 3rd row were place sideways, with four facing to the right and four facing to the left.  The impressions on the 4th and 5th rows had normal orientation.  As a result, these Romanian stamps exist in tête-bêche pairs and in pairs with one of the stamps being sideways.

When researching information for the content of this article, I came across a Romanian website that is absolutely fabulous!  This site shows the classical stamps of Moldavia in mint condition, used condition, and even on cover, from some of the greatest collections of Romanian stamps ever assembled.

Just click on the Specialised Romanian Stamp Catalogue button at the left and then select the group you want to view from the new menu.  There's even information on detecting the forgeries of the stamps of Moldavia!