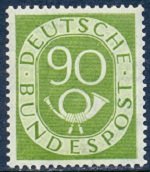 The first definitive stamps of the new Republic of Germany (West Germany) were the Posthorn and Numeral issues of 1951-1952.

I remember back in the 1970's, when I worked for a little stamp store in Northern California. At that time, no one here in the U.S. cared much whether a mint stamp was hinged or never hinged, and the dealer I worked for charged the Scott hinged prices for both hinged and never hinged material.

Occasionally, we would have visiting dealers from the Federal Republic of Germany drop by the store, looking for never hinged posthorn stamps. We used to privately laugh at them. We didn't consider the issue particularly attractive, and we had large stocks of them, so we were more than happy to sell them to the Germans for our retail prices! Collecting never hinged stamps didn't really catch-on with U.S. collectors until much later.

I guess the Germans had the last laugh though! Today, nice mint sets of the posthorn issue are hard to come by ... a mint lightly hinged set will run around $600, and a never hinged set will run in excess of around $1,800. Even used sets, which are relatively common, sell for around $20 a set.

Something we didn't realize at the time, was that the mint posthorn stamps were actually very scarce. These stamps were regularly used for postage in Germany, but due to the tough economic times after World War II in Europe, not many people saved supplies of mint stamps, especially the high denomination ones. They were also in use for only a very short period of time, around two years, before they were replaced by the President Heuss definitive series in 1954.

Today, a set of the posthorn definitive series is one of the key requirements for any mint West Germany (BRD) collection, and it is very costly.

The 5 Pf., 10 Pf., and 20 Pf. stamps were also issued in coils. The coil rolls, however, did not have control numbers printed on the backs of the stamps, so single examples of the coil stamps are identical to the sheet stamps. These are only collectible in vertical strips of 11 or more stamps ( the sheets had 10 rows ), and when collected as such, they are very expensive.

One 2.50 Deutschmark booklet was issued during 1951. The booklets each contained two panes, which are both shown in the two images above. The booklets are very scarce today. Lightly hinged, the panes are about $100 each, and never hinged, they are about $325 each.

These are also collected as pairs and blocks, showing combinations of the different denomination stamps.