I write to you with a purpose of inquiring about details of certain memorial issue. I attached picture for better understanding of the case. If you can provide me with any information about this issue, I would be grateful. It is a memorial issue of Hamburg city, year 1983. The block used on the sheet is from 15th May, 1974 (Michel B10 with nr. 807 inside). There were 1000 of these memorial sheets issued and I believe that is why I can't find any additional information about it or about the mark used. Thank you for your time! 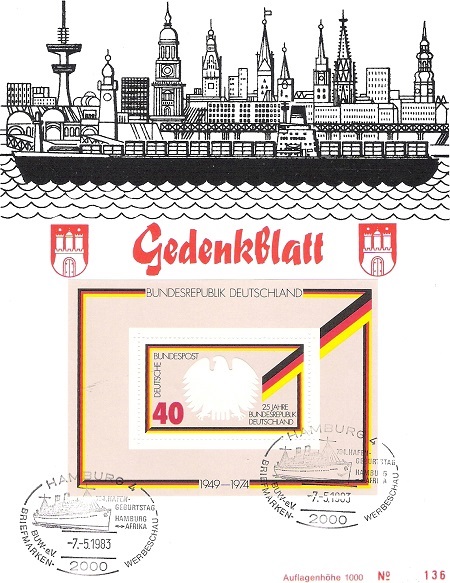 I never anticipated a linguistic problem with German .... English, YES! .... German, NO. .... but I guess this is a good example of such a translation problem, especially in terms of Philatelic usage.  The German language verb (past participle) gedenken can be translated to .... commemoration, remembrance, or recollection.  Today, the verb is used frequently in referring to Holocaust events, with its English translation as remembrance.  East German stamps frequently use a similar German verb, denken, which also means to think, to remember, or to imagine.  The word they use is denkmal, meaning monument or memorial, in reference to issues commemorating the sites of former extermination camps.

What you have here is a gedenkblatt which translates to a commemorative card, or philatelically, a souvenir card.  These cards are not issued by the government of the Federal Republic of Germany, and they are not valid for postage.  It is regular practice in Germany for a local stamp society or other type of organization to have promotional cards printed up publicize a stamp show or other type of event, or to be sold as a souvenir at the particular event.

This card pictures a shipping scene at the top, referring to Hamburg’s long history as a commercial shipping center, with the arms of Hamburg below.  Affixed to the card is a 1974 West Germany Souvenir sheet.  The commemorative cancel shows a ship of the Hamburg-Africa line, and the text refers to a Postage Stamp Trade Show on May 7, 1983.  Collecting commemorative or special event cancellations has always been very popular in Europe, and these types of souvenir cards have been around for a long time.  I have many of these in my Federal Republic of Germany and modern Austria collections, including one for an Austrian philatelic exhibition in 1943.