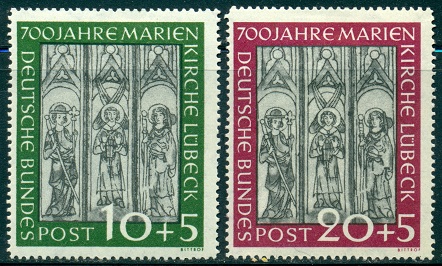 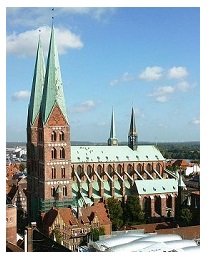 The Federal Republic of Germany issued the two charity stamps shown above (Mi. #139-40, Sc. #B316-17) on August 30, 1951 to celebrate the 700th Anniversary of the Lutheran Marienkirche in Lübeck.  These stamps were perforated 14 and watermarked multiple D P.  The designs of the stamps depict frescoes from the church.  The surtax aided in the reconstruction of the Marienkirche which was heavily damaged by Allied bombing during World War II.

The Gothic Marienkirche (St. Mary's Church), shown in a recent photograph at the left, was constructed between 1250 and 1350, and it stood for centuries as a monument to the power and prosperity of the old Hanseatic city of Lübeck.  The Marienkirche of Lübeck is the third largest church in Germany. 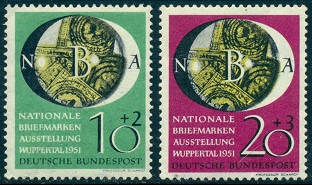 The two charity stamps shown above (Mi. #141-42, Sc. #B318-19) were issued September 14, 1951, to publicize the National Philatelic Exposition in Wuppertal.  The designs feature old German stamps beneath a magnifying glass.  These stamps were perforated 14 and watermarked B P and zigzag lines. 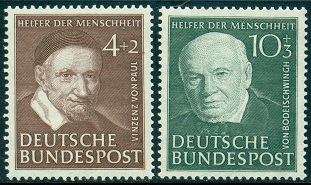 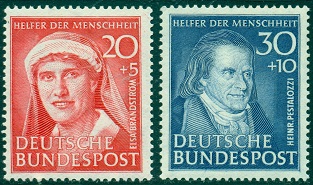 The Federal Republic of Germany issued the four charity stamps shown above (Mi. #143-46, Sc. #B320-23) on October 23, 1951. These stamps were engraved, perforated 14, and are wartermarked multiple B P and zigzag lines.  The surcharges on these issues went to aid public charities.

The 1951 issues depict famous people associated with charity.  They are as follows.

The central design of the stamp features the profile head of Wilhelm K. Röntgen (1845-1923).  He was a German physicist, who, on November 8, 1895,  produced and detected electromagnetic radiation in a wavelink  known today as "X-rays" or "Röntgen rays".  For this accomplishment, he was awarded the first Nobel Prize in Physics in 1901.