The Commemorative Portugal stamps of this period celebrate a historic first flight and the lives of two of the "giants" of Portuguese literature.

The multiple-subject large commemorative sets of Portugal stamps shown on this page are grouped by design type, instead of the usual ascending order by denomination.  Hopefully, this will enable the design description tables to occupy less space, and it will make the descriptions much easier for the website visitors to follow. 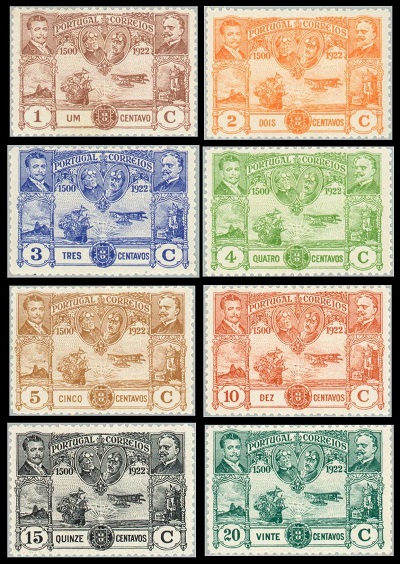 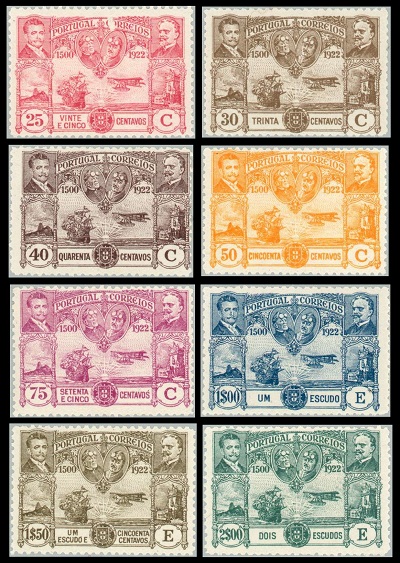 The sixteen pictorial Portugal stamps shown above (Sc. #299-314) were issued on March 30, 1923 to celebrate the 1st Anniversary of the First Aerial Crossing of the South Atlantic from Lisbon, Portugal to Rio de Janeiro, Brazil, between May 30 and June 17, 1922. 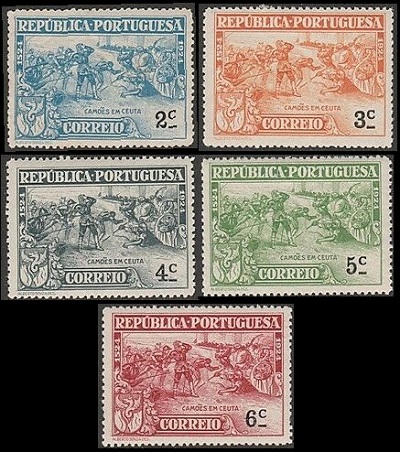 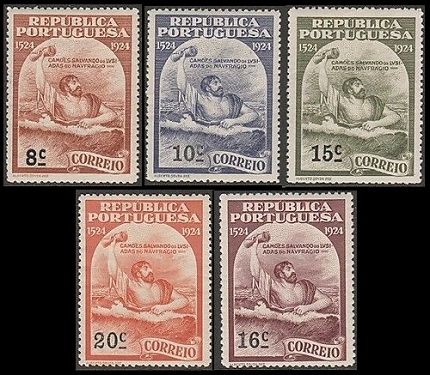 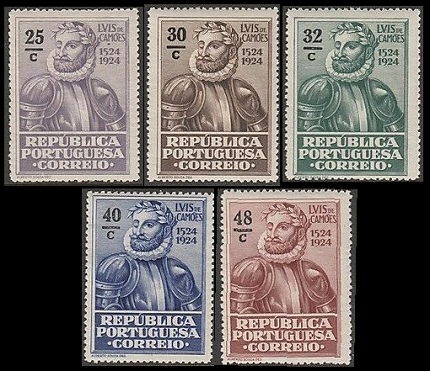 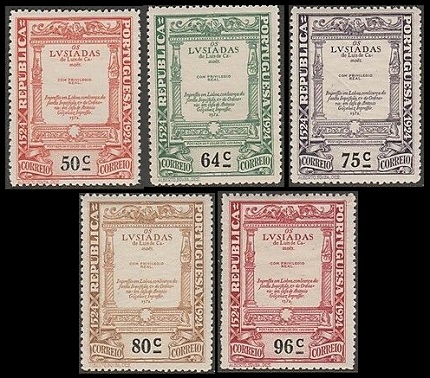 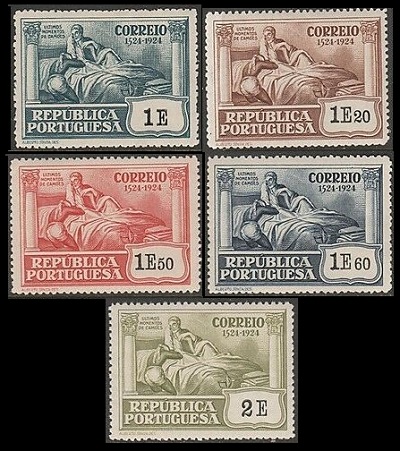 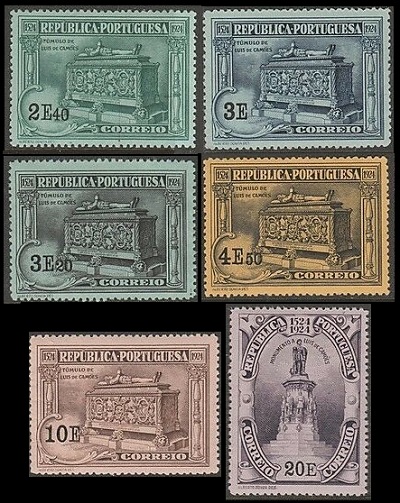 The seven common designs, in the order that they are shown above, are as follows: 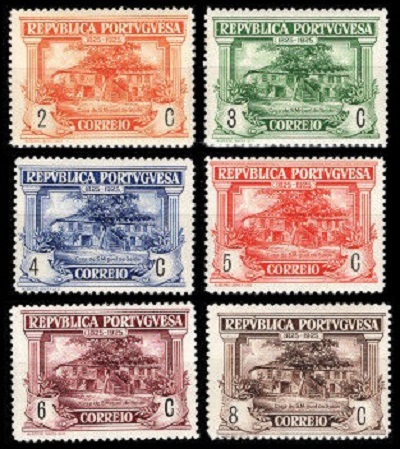 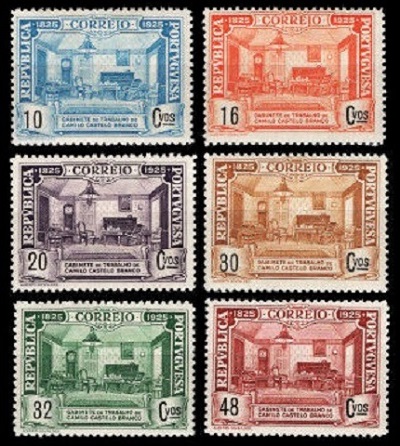 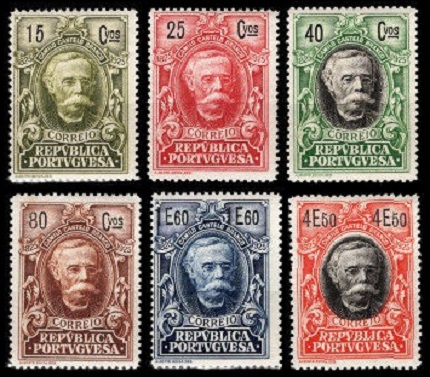 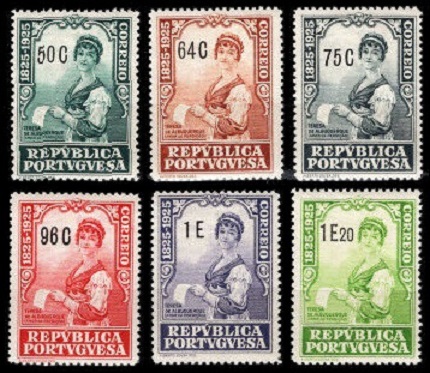 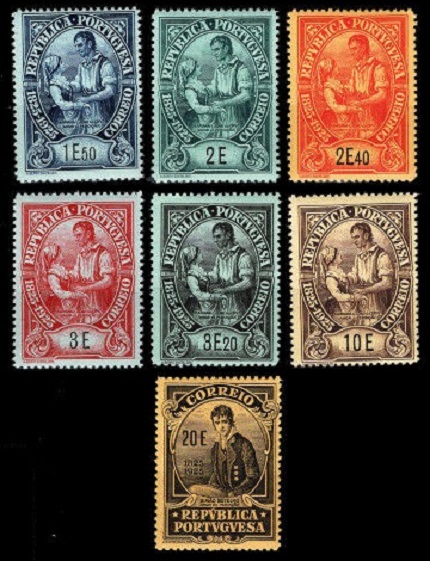 
Return to Portugal Stamps from
Commemoratives of 1923-1925 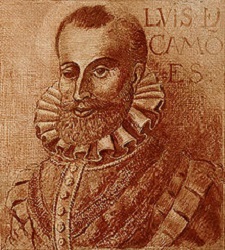 Luís Vaz de Camões (English: Camoens) (c. 1524-1580) is considered Portugal's and the Portuguese language's greatest poet.  His verse has been favorably compared to that of Shakespeare, Homer, Virgil, and Dante.

Though he did write lyrical poetry and drama, he is best known for his monumental epic poem, "Os Lusíadas" ("The Lusiads"), a fantastical interpretation of Vasco da Gama's discovery of the sea route to India.  The epic poem consists of 10 cantos, having a total of 1,102 stanzas.

During his service in the Portuguese Overseas Militia from the 1550's to the 1570's, he was able to travel to the farthest reaches of the Portuguese Colonial Empire.  It was during these travels, that he wrote The Lusiads, which was published after his return to Lisbon.

Camões died in Lisbon on June 10, 1580. The day of his death is now celebrated as a national holiday in Portugal.   He is buried near the tomb of Vasco da Gama in the Jerónimos Monastery in Lisbon. 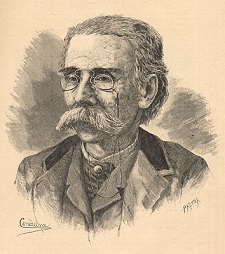 Camilo Ferreira Botelho Castelo-Branco (1825-1890) was a prolific Portuguese writer.  His writing style combines the sentimental aspect of Romanticism with his own personal combination of sarcasm, bitterness, and dark humor.

Castelo-Branco led a very turbulent life from the very beginning, having been born out of wedlock and then orphaned during his infancy.

He was later educated in medicine and theology, but he ultimately chose to become a writer.

Unfortunately, Castelo-Branco grew up in a Roman Catholic country, during a time when acts of passionate misbehavior were serious felonies!  As a result, he was incarcerated twice, and it was actually during his times in prison that he did some of his most prolific writing.

During Castelo-Branco's lifetime, he wrote over 260 books, which include novels, plays, and essays.

On June 18, 1885, Castelo-Branco was created the Viscount of Correia Botelho by King Luis I, in recognition of his contributions to Portuguese literature.  Being unable to write anymore, due to age and infirmity, he was also granted a pension by the Portuguese parliament.