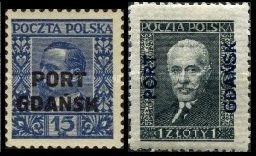 Henryk Adam Aleksander Pius Sienkiewicz (1846-1916) was a Polish journalist, Nobel Prize winning novelist, and a philanthropist.  He is best known for his historical novels, the best known of which is his monumental work called Quo Vadis.

The 1 Zl. Mościcki stamp was again overprinted on July 1, 1933.  On this issue though, the two lined overprint is applied in dark blue to each side of the stamp, as shown above, at the right (Mi. #25, Sc. #1K24).  This particular version is much better, as it leaves a clear view of the subject which had been obscured by the former horizontal format overprint used in 1929. 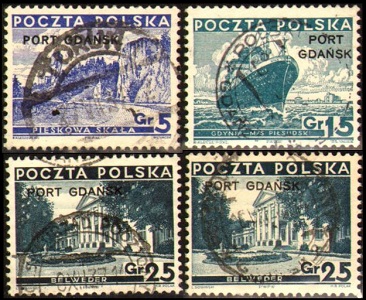 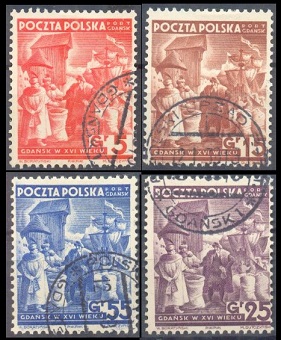 On November 11, 1938, the first set of postage stamps actually printed for the Polish Post Office in Danzig were issued.  The four stamps, shown above (Mi. #34-37, Sc. #1K33-36), were issued to commemorate 20th Anniversary of the Founding of the Republic of Poland.  They all have the same design, with that being a painting of Polish Merchants Selling Wheat in Danzig in the 16th Century.

The Polish post offices in Danzig were closed on September 1, 1939, following the annexation of Danzig by the Third Reich.