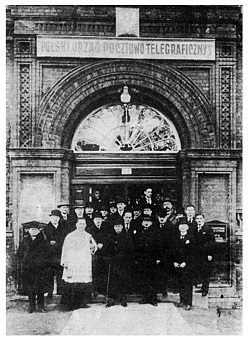 Port Gdansk is the Polish language name for the Port of Danzig.

As provided in the Treaty of Versailles, Poland was permitted to create a separate post office in the Freistadt Danzig.  The Polish post offices were considered extraterritorial Polish property, and their primary duty was to handle mail between Poland and international destinations. The first Polish post office was established in Danzig in 1920, but Poland did not issue separate postage stamps for use on mail originating from their postal facilities in Danzig.

On January 5, 1925, the Polish Postal and Telegraph office was opened at Hevelius Square in Danzig. This was the third Polish post office in Danzig and the first to be open to the public. The public domain picture at the upper left shows the postal employees standing in front of the entrance to the new post office building in 1925.  Mail posted at the Polish Postal and Telegraph office used the current postage stamps of Poland, overprinted “PORT GDANSK”.  These stamps were valid only at the Polish post offices in Danzig.

The Scott catalog number references in this category are from the POLAND - OFFICES ABROAD catalog listings. 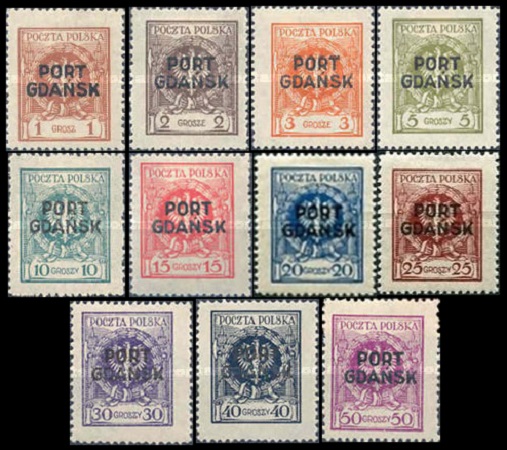 The eleven stamps shown above (Mi. #1-11, Sc. #1K1-11) were issued January 5, 1925 to coincide with the opening of the Polish Postal and Telegraph office in Danzig.  The Poland Coat of Arms definitive stamps of 1924 were overprinted "PORT GDANSK", to create these new stamps for use in Danzig. 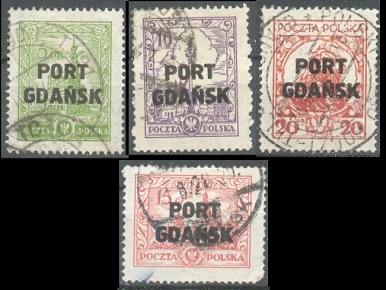