The commemorative Polish stamps that were issued during the 1930's reflect the new status of Poland as a thriving European republic.  The quality and appearance of the new stamps was a great improvement over that of the earlier commemorative stamp issues.

The 30 G. denomination commemorative Polish stamp shown above (Sc. #267) was issued on May 3, 1932 to celebrate the 200th Anniversary of the Birth of George Washington.

The design features portraits of George Washington (1732-1799), the commander-in-chief of the Continental Army and the first President of the United States, Tadeusz Kościuszko (1746-1817), and Casimir Pulaski (1745-1779).  Polish military leaders, Tadeusz Kosciuszko and Casimir Pulaski, both served as officers in the Continental Army, during the American War of Independence (1775-1783) against Great Britain. 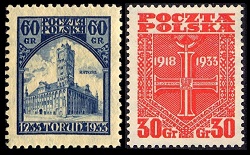 The 60 G. denomination commemorative Polish stamp shown above, at the left (Sc. #275), was issued on January 2, 1933 to celebrate the 700th Anniversary of the City of Torun.

The design features a view of the Torun City Hall.  The first settlement at Torun, on the Vistula River, dates back to the 8th Century, but it was greatly expanded in 1233 by the Knights of the Teutonic Order.  Torun joined the Hanseatic League in 1264, and by the 17th Century, the city had become one of the major European trading ports.


The 30 G. denomination commemorative Polish stamp shown above, at the right (Sc. #279), was issued on November 11, 1933 to celebrate the 15th Anniversary of Independence.

The design features the "Cross of Independence".

The design features a portion of the Altarpiece of St. Mary's Basilica in Krakow.

Veit Stoss (1450-1533) was a Polish born German sculptor whose career transitioned between the late Gothic and the Northern Renaissance periods.  He is best known for his altarpiece in St. Mary's Basilica in Krakow, completed between 1477 and 1489.  The altar was dismantled and taken to Germany in 1941.  It was discovered in Bavaria in 1945, restored, and returned to St. Mary's Basilica in 1951.

The design features the painting "John III Sobieski and Allies before Vienna" by Jan Matejko (1838-1893).

The two overprinted definitive Polish stamps shown above (Sc. #280-281) were issued on May 5, 1934 for the Katowice Philatelic Exhibition. 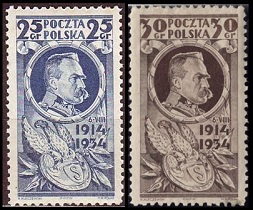 The two commemorative Polish stamps shown above (Sc. #282-283) were issued on August 6, 1934 to celebrate the 20th Anniversary of the Polish Legion during World War I.

Their common design features the portrait of Marshal Josef Pilsudski. 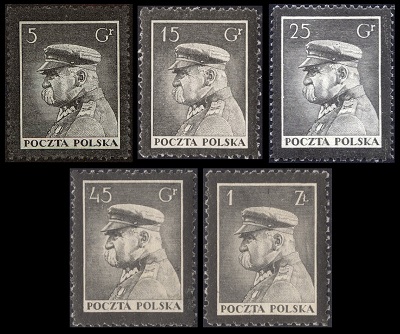 The two overprinted Polish stamps shown above (Sc. #306-307) were issued on August 15, 1936 to publicize the Gordon-Bennett International Balloon Race.

The overprinted 15 G. denomination definitive stamp shown above was issued on May 25, 1935 to publicize a proposed Memorial to Marshal Pilsudski.

The stamps were printed in two formats, as follows:

The 1 Z. denomination stamp shown above (Sc. #305) was issued on June 3, 1936 to celebrate the 10th Anniversary of the Presidency of Ignacy Moscicki.