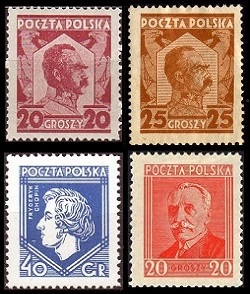 
The 40 G. denomination Polish stamp shown above, at the bottom left (Sc. #243), was issued in February 1927 to celebrate the First International Frederic Chopin Piano Competition.  The competition has been held in Warsaw every five years since then.

Fryderyk Franciszek Chopin (1810-1849) was a Polish born composer and virtuoso pianist of the Romantic Era.  Through his compositions, performances, political activities, and romantic activities, Chopin became one of music's first international "superstars"!  He lived in Paris during the final years of his life, and it was there that he died from complications of Tuberculosis in 1849.


The 20 G. denomination Polish stamp shown above, at the bottom right (Sc. #245), was issued in May 1927 to celebrate the Anniversary of the Election of President Ignacy Moscicki. 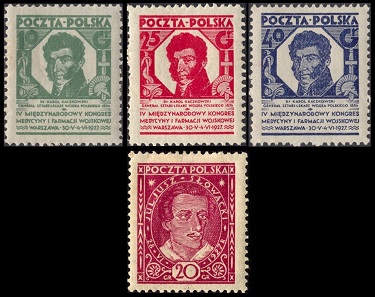 The three commemorative Polish stamps shown above, at the top (Sc. #246-248), were issued on May 27, 1927 to celebrate the Fourth International Congress of Military Medicine and Pharmacy, held in Warsaw.  These stamps feature the portrait of Dr. Karol Kaczkowski.

Karol Maciej Kaczkowski (1797-1867) was the chief physician of the Polish army during the 1830 National Uprising against the Russian Empire.

The 20 G. portrait stamp shown above, at the bottom (Sc. #249), was issued on June 28, 1927 to celebrate the Transfer of the Remains of Julius Slowacki from Paris to Krakow.

Julius Slowacki (1809-1849) was a Polish Romantic poet, and he is considered the father of modern Polish drama.  Being a strong proponent of Polish independence, Slowacki lived in exile, in Paris, during the last decade of his life.  It was there that he died of Tuberculosis in 1849.  His remains were transferred from Paris to Wawel Cathedral in Krakow during 1927. 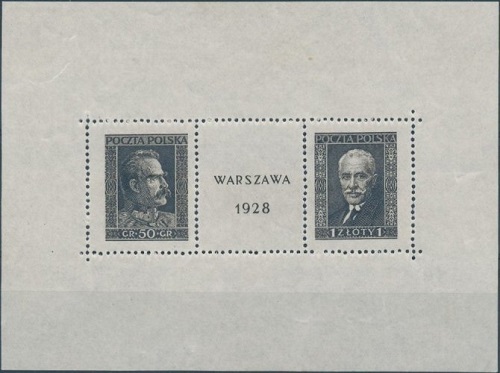 Poland's first souvenir sheet, shown above (Sc. #251), was issued on May 3, 1928 for the First National Philatelic Exhibition, held in Warsaw.  The souvenir sheet was presented to each purchaser of a 1.50 Zloty admission ticket to the exhibition.

The souvenir sheet contains a promotional label and two stamps similar to the new high-denomination definitive postage stamps that were also issued during 1928. 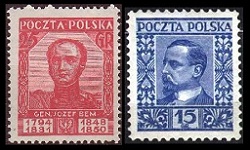 The 25 G. stamp shown above, at the left (Sc. #256), was issued during May 1928 to commemorate the Return of the Ashes of General Josef Bern from Syria to Poland.

Josef Zachariasz Bern (1794-1850), later known by the name Amurat Pasha, was a Polish born military officer, serving in various armies during his lifetime.  His ultimate goal was to support any campaign against the Russian Empire that would result in Polish independence.  He died in Aleppo, Syria in 1850, while serving in the Turkish army, during their struggle against the Russian Empire.

Henryk Sienkiewicz (1846-1916) was a Polish journalist, novelist, and a Nobel Prize laureate (1905).  He is best remembered for his historical novels, especially his internationally known best-seller "Quo Vadis", first published in 1896.  Having died while living in Vevey, Switzerland, his remains were repatriated to Poland in 1924, and they were interred in the crypt of St. John's Cathedral in Warsaw.

The four commemorative Polish stamps shown above (Sc. #263-266) were issued on November 1, 1930 to commemorate the Centenary of the Insurrection of 1830, also known as the November Uprising.

The design features a 9th Century pagan Slavic deity, though that attribution has since been disputed.