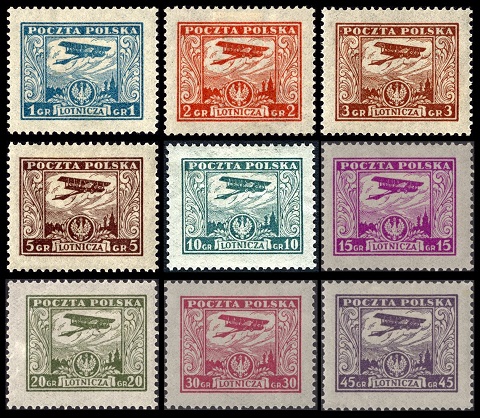 The nine definitive Polish stamps shown above were issued during 1925 for use on airmail letters.

The common design features a biplane above Warsaw.

The 30 G. denomination commemorative airmail stamp shown above (Sc. #C10) was issued on April 10, 1933 to publicize the Winning of the Challenge 1932 Air Race by two Polish aviators.

The design features portraits of Captain Franciszek Zwirko and Stanislaw Wigura, along with a RDW-6 Polish monoplane in flight.

Franciszek Zwirko (1895-1932) was a Polish sport and military aviator.  Stanislaw Wigura (1903-1932) was a Polish aviator and aircraft designer.  Flying a RDW-6 monoplane, designed by Wigura, the two aviators won the Challenge (Circuit of Europe) Air Race in August 1932.  They died, en route to an air meet in Warsaw, when their plane crashed in southern Poland on September 11, 1932. 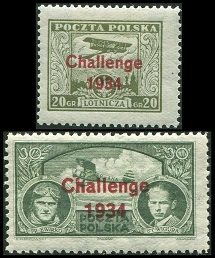