The first Polish stamps that were issued for the purpose of raising extra money for charitable purposes appeared in 1919.  The earliest Polish charity stamps were created by overprinting and surtaxing the regular definitive postage stamps of 1919 to 1920.

These so-called "semi-postal", "charity", or "surtaxed" stamps are actually postage stamps, intended for use by postal patrons for various types of postal services.  They feature a "value added amount" or "surtax amount", in addition to the postal denomination of the stamp, and purpose of this extra amount was for donations to various public charities. 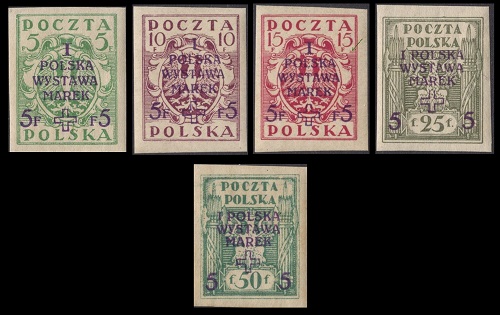 The five surtaxed Polish stamps of 1919 shown above were issued on May 3, 1919 in conjunction with the First Polish Philatelic Exhibition.  The five stamps were issued both imperforate (Sc. #B1-B5) and perforated 11 1/2 (Sc. #B6-B10). 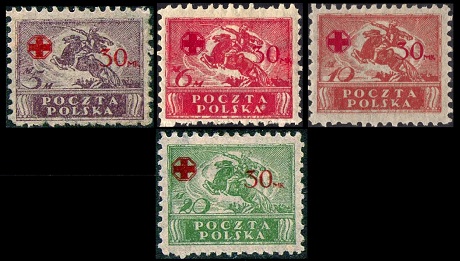 The four surtaxed Polish stamps of 1920 shown above were issued on March 5, 1921.  The stamps were were printed on thin laid paper and they are perforated 9.  Stamps having differing perforation gauges are forgeries. 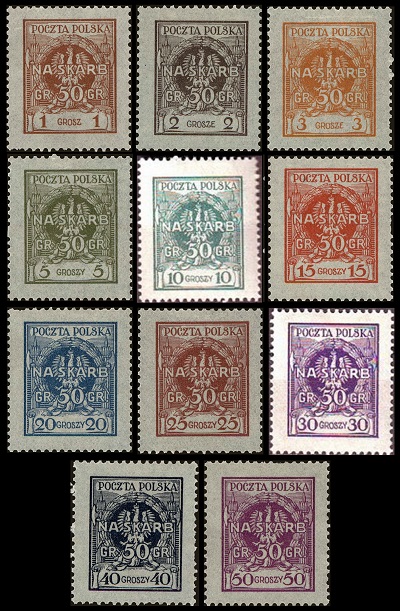 The 50 G. surtax on each of the stamps aided "National Funds". 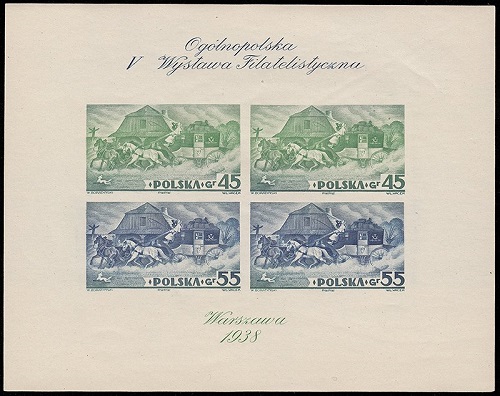 The souvenir sheet shown above was issued on May 3, 1938 in conjunction with the Fifth National Philatelic Exhibition, held in Warsaw.  The souvenir sheets were issued with the stamps being imperforate (Sc. #B29) or perforated 12 (Sc. #B29C).

The common design of the stamps in the souvenir sheet features a Stagecoach and Wayside Inn.

The souvenir sheets sold for 3 Z. at the exhibition, with the face value of the stamps being 2 Z.  The 1 Z. surtax aided the exhibition fund. 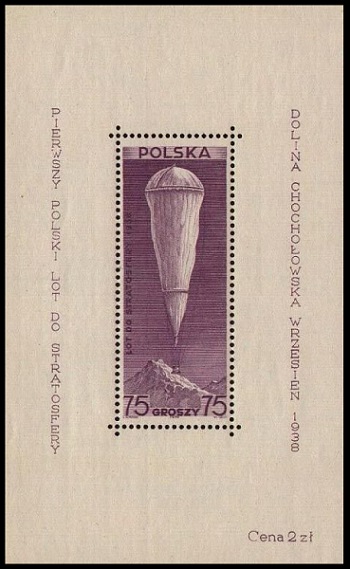 The souvenir sheet shown above (Sc. #B31) was issued on September 15, 1938 to promote a proposed Polish Stratospheric Balloon Flight.

The design features the Stratospheric Balloon "The Star of Poland" over the Tatra Mountains.  The stratospheric balloon flight, with the goal of reaching 30 Kilometers in altitude, was attempted on October 14, 1938.  With the bag being filled with hydrogen, instead of helium, the balloon caught fire, when it was less than 100 feet above the ground.  The gondola returned safely to the ground.  Another flight, using helium, was planned for late 1939, but it was canceled, due to the German invasion of Poland.

The price of the souvenir sheet was 2 Z., with the postal value being 75 Gr. and the surtax being 1.25 Z.  The surtax was donated to the scientific council for the flight.

The three surtaxed Polish stamps shown above (Sc. #B32-B34) were issued between December 1938 and February 1939, with the surtax being for Winter Relief.

The common design features an allegorical representation of warming hands near a fire. 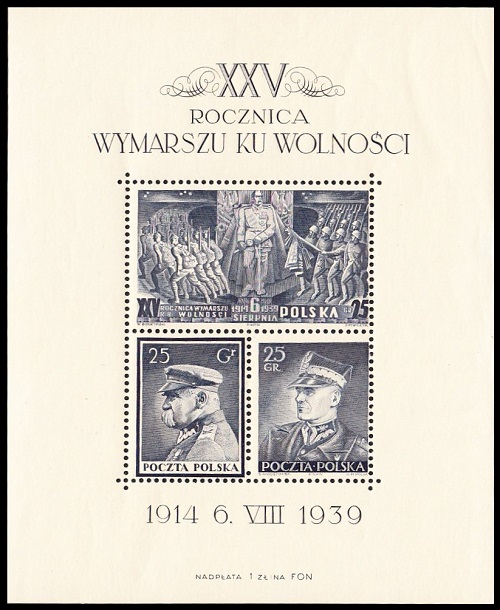 The souvenir sheet shown above (Sc. #B35) was issued on August 1, 1939 to celebrate the 25th Anniversary of the Polish Legion during World War I.

The price of the souvenir sheet was 1.75 Z., with the postal value being 75 Gr. and the surtax being 1 Z.  The surtax aided the National Defense Fund.

Sadly, one month after the release of this souvenir sheet, following invasions by Germany and the USSR, the Second Republic of Poland no longer existed.

The common design features an allegorical representation of "The Light of Knowledge".

The 5 G. surtax on each of the stamps benefited educational funds.

The Torun commemorative stamp shown above, which had originally been issued in blue in January 1933, was re-issued in red brown on May 21, 1933.

This stamp (Sc. #B28) was sold with a 40 G. surtax, which benefited the Katowice Philatelic Exhibition.