New commemorative Polish stamps appeared during 1919.  The most important events of this period celebrated peace and the re-emergence of Poland's national identity. 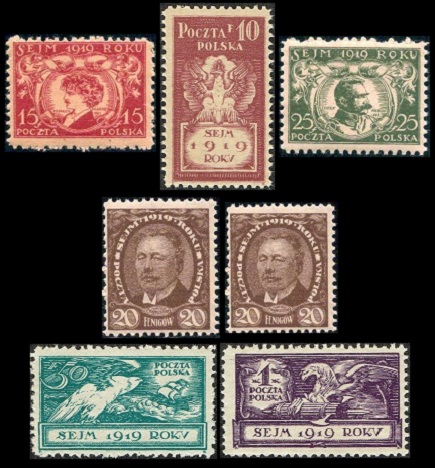 The seven commemorative Polish stamps (Sc. #133-139) shown above were issued during 1919 and 1920 to celebrate the First National Assembly of Poland.  They were printed on wove or ribbed paper, and they were perforated 11 1/2.

The National Assembly of Poland (Polish: Sejm, English: Diet) is the publicly elected lower house of the Polish parliament, similar to the UK House of Commons or the USA House of Representatives.  The upper house of the Polish parliament is called the Senat (English: Senate).  The First National Assembly of 1919 passed a new constitution, which established a parliamentary republic and proclaimed the assembly's sovereignty.

The three commemorative stamp designs (Sc. #154-155A) shown above were issued during 1921 and 1922 to celebrate the Signing of the Treaty of Riga on March 18, 1921.  They were printed on thin to thick, wove or laid paper, and they had varying perforation measurements, ranging from 9 to 14.

The design features a Sower and the Rainbow of Hope.

The Treaty of Riga was the peace treaty between the Republic of Poland and the USSR, following the end of the Polish-Soviet War of 1919-1921.  The treaty established a permanent Polish-Soviet border, which would remain unchanged until the beginning of World War II. 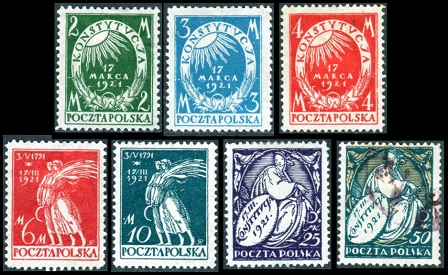 The seven commemorative Polish stamps shown above (Sc. #156-62) were issued on May 2, 1921 to celebrate the New Constitution of March 17, 1921.  These stamps had varying perforation measurements, ranging from 11 to 13.

This new constitution, called the March Constitution, was based on the French constitution, and it was considered very democratic.  The constitution forbade racial and religious discrimination.  It also abolished all royal titles and state privileges.

The three Polish stamps (Sc. #192-194) shown above were issued during 1923 to commemorate the 450th Anniversary of the Birth of Nicolaus Copernicus and the 150th Anniversary of the Death of Father Stanislaus Konarski, along with the Creation of the Commission of Public Instruction by the Polish parliament.  These stamps had varying perforation measurements, ranging from 10 to 12 1/2.